Continuing with the weekend posts I swung by PC World and Currys. Looking for a speaker system to add a bit of richness of experience to the Chromecast we installed last week. PC World hardly has anything – they are moving back to their computing roots.

Currys is where it is at for this

kind of stuff. I was unnaturally thrilled to come across this Sony 4K Ultra HD TV (the good old KD-55X9005A). A snip at £3,299. OK it is a nice TV. The picture quality was great. However £3,299 puts it in the more money than sense bracket. Since when has that been a problem for the multi-millionaire looking to impress the bloke in the next mansion.

I imagine that the promo video it was playing on the loop was one of the few bits of content you could get for it. Apparently you get 8 “free” Blu-ray discs to watch when you buy the TV.  I managed to find 10 movies available in 4K format on one site and 11 on another – all Blu-ray. I’m sure there will be more.

It is early days for 4k TVs. Of course prices will come down. However I may be wrong but I can’t imagine that Currys will sell many this Christmas. If you are going to blow the dough you might as well buy the Bose sound bar for three hundred quid. Great offer. 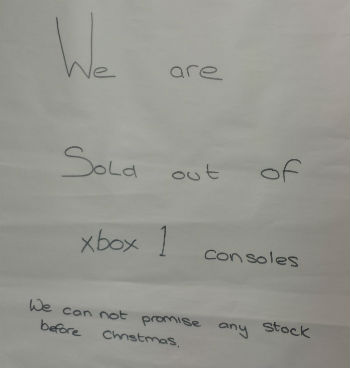 The XBox1 console on the other hand is a different kettle of anchovies. If you ain’t planned ahead on this one you’re not going to be taking it home from the Lincoln Currys store, nosireebob.

Currys look as if they were caught by surprise with the rush because they have had to scribble a quick sign guaranteed to disappoint the eager gamer looking to upgrade his or her experience for the festive season.

Can’t understand why you’d want it meself but I don’t think I’m representative.

I leave you with a video taken of the TVs in Currys Lincoln. I am easily impressed and thought that the splendid array of colour was very nice.

Was listening to the Jeremy Vine show on my way to the shops this lunchtime. They were talking about TV detector vans and were there really such things.
Someone came on an said that he used to drive one but that there was no equipment inside, or at least nothing switched on. The TV license people used to use them to scare people into buying a license and they would have a team of people blitz an area checking on addresses that had not been registered as having a license.

We didn’t have a TV until my oldest son Tom was 13 years old and I do recall a knock on the door once from someone who declared himself to be working for the licensing people. I told him we didn’t have a TV and he went away. Simple as that. Check out my other TV license story (previous story about TV license).

Wind the clock forward a few years and one question I have been asked recently is whether you need a TV license to watch TV on tinterweb.

The answer is yes if you’re talking live TV.  However I am not aware that anyone has ever been done for not having a license whilst watching TV in this way.

There are probably two factors in play here. Most people do have a TV license and therefore are already covered. For those rebs that don’t have a license then it isn’t an easy thing to track you down.

The music industry, which is through the Digital Economy Act, going to be sending letters to people it believe has been infringing copyright (ie downloading stuff without paying) tracks down the alleged miscreants from the IP address being used for the torrent. Prior to the DEA it needed a court order to obtain the name and address of the subscriber.

The Licencing Authority can probably source similar information in a similar way from the BBC. It would need separate court orders for Sky, Virgin et al but would find it very difficult to deal with any overseas entity, of which there are many. The effort would have questionable value remembering that the LA doesn’t know who already has a licence and who doesn’t in these circumstances.

This will be an interesting situation to follow as more and more people rely solely on online sources for their media fix.

Tapped and dictated into my SGS4 whilst the boys see if my hard drive really is dead!

I think I’ve been burying my head in the sand as I have only just noticed Android thumb drives. Following on from my earlier post on low cost Android tablets 2013 could well be the year you kiss goodbye to your set top box, if you had one in the first place. Mini thumb drives loaded with Android and with a HDMI interface for plugging into your TV are the way ahead. They are sourced from China for around £32 including delivery!

Running with Android allows you to download apps from the Google Play Store which means you can, in theory use the drive to run BBC iPlayer, Netflix or any other media service service. You can also insert a micro SD card with some of your favourite1 movies or music for locally sourced content. These drives support WiFi for internet access and you can either plug in a USB keyboard or use wireless access to control it.

It’s everything you can do using the RaspBerryPi but without having to learn to programme or sysadmin. If you use an external powered  USB hub you can plug in some extras and, for example, use a webcam for video chats.

I’m going to get one and check it out. The only problem I can forsee is that we only have one telly at home. This is already called upon by two boys competing for XBox time and my wife who wants to watch every cookery programme on the planet. Also I don’t really watch that much TV but hey… It’s got to be done I think. It’s a cheap way of hooking your TV up to the internet.

The next problem is which one to buy – Amazon has 840 results for “Android Stick”. Any suggestions duly noted.

1 I think I’m starting to sound like a cheesy TV advert here!