LINX CTO Mike Hughes told us that traffic across the LINX network has reached 460Gbps.  Thats up 40Gbps in the last quarter and around 60% up year on year.

The growth is partly due to new members and whilst this isn’t a definitive statement on the growth rate of the internet it does match quite well with other sources.

In the last year the growth pas particularly come through an increase in the number of 10Gbps connections, up now to 175 ports.  The LINX team is already preparing for 100Gbps technology, the standard for which is due to be ratified next year. 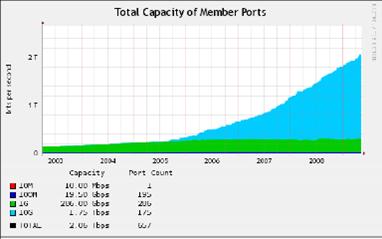 The chart clearly shows the growth of the number of 10 Gig ports over the last few years.  It’s a bit grainy but clear enough. The network capacity is now north of 2Terrabits per second over 650 ports.