I went along to Internet World at Earl’s Court yesterday and was pleasantly surprised to find out how useful an afternoon it was. I saw something that I had never seen before and that was people queuing around the block to hear the seminars. 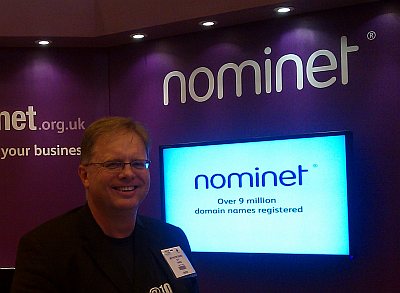 These were largely internet marketing and social media related. The only seminar I saw that was practically empty related to “the cloud”. Nobody at this show was interested in the nuts and bolts clearly although there was a good spread of exhibitors across a wide range of internet technology areas.

I find it difficult to get excited at all the trendy social media stuff that is going on.  For me it is more about the obvious and intuitive rather than the science.

For example I get very disappointed when I look at the list of my new followers on Twitter. 3 times out of 4 they are accounts trying to sell me something. They never seem to have interesting tweets and don’t get followed back. In a few days they have unfollowed me (in a  huff!) and moved on. 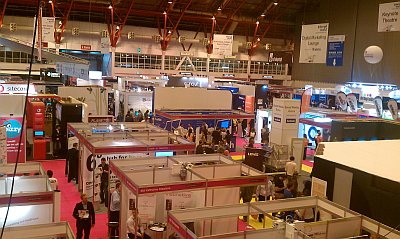 Now people claim to make a living out of imparting this kind of information but at the end of the day after a few short hours of playing with Twitter it is blindingly obvious.

There were a number of exhibitors selling Virtual Servers and Storage.  This is going to be a very interesting area of development. Vendors are going to have to be careful that they get their strategy/pitch right particularly in the wake of the Amazon EC2 outage. Demonstrable quality is going to be a big selling point.

Photos are: header – queues outside one of the social media seminars, me at the Nominet booth and an overhead shot of some of the exhibits (fwiw). Click on any of them for a bigger shot. Definately worth a visit I thought though they need to invent parking sensors for mobile phones – so many people wandering around immersed in their iPhone/Android/BlackBerry etc.

PS it was nice to meet with Twitter friend @markmapes in the flesh. His American accent took me completely by surprise though with hindsight it shouldn’t have done:)

2 replies on “Amazed by the Queues for Social Media Talks at Internet World #iw_expo,Nominet”

I enjoyed this post! 🙂
I had a couple of ‘spam’ emails from Indian SEO companies that said they would like to meet me at this event. I should have asked you to give them a *kick*

EDIT: I’ve just replied to ‘our’ Storm Tweet while writing this! I think we are at cross purposes 🙁
HmmmUK

Great to meet you as well at the IW Expo. Thanks again for the coffee. Always great to meet Twitter folk off line. Sorry my American accent threw you, but maybe that means I’ve fit in?