4G is like lightning, it’s an eye opener and seriously enhances the mobile data experience. This post talks about the truly exciting O2 4G trials in London and thinks about how the technology is going to change the mobile game.

Mobile data is already an important feature in the business communication landscape. As an ISP we see demand for it in the area of machine to machine, rapid site deployment, backup solutions for Disaster Recovery scenarios and of course straightforward internet browsing and email access from mobile devices.

The strategic importance of mobile data has even led Timico to invest in an Ethernet connection direct into the O2 network. We can now offer mobile MPLS solutions that sit within the same environment as existing fixed line MPLS networks – ideal for businesses that need security in both fixed and mobile networks.

Over the last year or two in the UK the focus in fixed line broadband has been on Fibre To The Cabinet, or in marketing jargon Fibre Broadband. With downlink speeds of “up to”40Mbps (to be upgraded to 80Mbps this coming April) the technology is revolutionising how people use their broadband connection. Add in the growth in high quality streaming video and gaming services and it is easy to see how the additional available bandwidth will be consumed.

Until very recently the mobile world, in the UK at least, has remained firmly in the domain of 3G – a technology that now seems relatively stone aged compared with Fibre Broadband. HSDPA makes the experience more bearable but it is still many Mega-bits apart from its fixed line counterpart.

The mobile companies are poised to change all this with LTE (Long Term Evolution) otherwise known as 4G. Trials are being conducted in a small number of locations in the UK.  Timico is the first O2 Service Provider partner to be invited onto their London trials I am pleased to be able to report on my experiences.

This service is like lightning. It’s fast, speedy, call it what you like it’s a life changer. It’s been one of those projects that has been a pleasure to be involved in.

With only 25 masts around central London coverage is nowhere near what you would describe as ubiquitous but this is only a trial. When in a coverage area the speeds are great.

I started off in McDonalds at Kings Cross with a dongle fresh out of the box. After installation of the software, which was easy, the dongle performed an automatic firmware upgrade, also easy, using its own 4G connection.

At McDonalds I was getting over 13Mbps down

and 540Kbps up which in my mind was a bit disappointing though I’m not sure it should have been. I have experimented with O2s 4G at their offices in Slough and seen much faster speeds both up and down  than this. In fact this speed at McDonalds is faster than I get from my home ADSL2+ connection so I couldn’t grumble.

I knew I could do better than this. Roaming around town on the top deck of a number 25 bus I got 15.5Megs down

and amazingly 25Megs up – near Wardour Street. The ping times for all these measurements were impressive.

In torrential rain I moved around on foot dipping into various places to check out the speeds and moving generally towards known good hotspots.

In the end I took shelter in a pub called the Devonshire Arms on Duke Street, just off Oxford Street. Sat in the window and sipping a cup of tea I hit the jackpot with

40Megs down and 23 Megs up. I did various tests including varying the browser – Chrome was much better than IE. I also did video calls with both Timico’s own VoIP service and Skype.

The screenshot on the right is of four iPlayer daytime TV streams.  The things you have to do to get a blog post written!

itself. The 2,600 MHz LTE itself will go to 150Megs but the dongle tech doesn’t currently support this. We do have to remember this is very much a test rather than a production rollout so it isn’t going to be perfect but even considering this the experience has been great.

There were a few observations to be made out of this trial. The 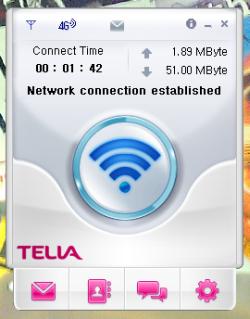 raw speed I saw with O2s 4G was terrific when in good coverage areas. The amount of data you can download in a very small amount of time is going to change the game. In upgrading the dongle firmware for example I used 50MB in around a minute. If you consider that until recently a typical “fair use” policy for an “unlimited” data package was 500MB then you can see that the model is going to have to change. The backhaul capacity that mobile operators are going to have to build in to their networks is going to have to see growth measured in orders of magnitude.

Spectrum allocation for 4G rollout is going to be very important. At 2,600MHz the bandwidth you can get is much higher than at 800MHz, say. However the in-building penetration at the higher speed is not as good so the overall network design represents an interesting (though not insurmountable I’m sure) challenge for engineers. This makes the forthcoming Ofcom spectrum auction important – there is a mix of spectra that is going to be optimum for commercial success.

As a side note it is going to be interesting to see how much the operators are prepared to pay for spectrum – they all think they overpaid for 3G but the demand has not been there for most of the time that 3G has been around. It is different this time and people are starting to get used to paying for the bandwidth they use.

From an end user perspective the ability to have genuinely fast internet access on your laptop, tablet or mobile phone is going to change their experience. Whilst WiFi is becoming more common, at least in pubs, coffee shops and other public places the need to authenticate is still a nuisance. Also not having to wait whilst a screen loads up on your mobile phone needs to become a human right!

It is certainly going to drive more business into the mobile environment. Timico, for example, gives all its salesforce an iPad so that they can demonstrate Timico applications and our customer portal on the fly at a customer’s premises. An iPad with 40Megs of bandwidth all of a sudden becomes a low cost endpoint for a telepresence HD conferencing system.

The gaming experience is going to be great1. Who knows what mobility combined with high speed internet will do for that industry, freed from the shackles of the lounge or the bedroom. City wide action games? Orienteering for the 21st century?

The use of mobile technology for backup purposes will also extend into many more areas of businesses. Typically 3G is used where only low bandwidth is required or where any bandwidth is better than no bandwidth. 4G becomes a viable solution for offices – even company HQs.

Of course with many more people on a production 4G network the average speeds available may well come down but LTE really is a game changer.

It’s nice to to be in a position of being able to play with these new toys but there is a very serious business side to this. As those of you who have met me recently will probably know I’ve been testing  the technology for a few weeks now – Timico is the first O2 service Provider partner to be given access to their 4G network. It forms part of the long term mobile data strategy of our business and follows nicely on from the direct connection into the O2 network I referred to at the start of the post.

I should finish off with a big thank you to O2 for including me in the trials. It’s good to be able to work with such a progressive partner.

1 I’m not a gamer but one of my kids would spend his entire live tethered to the Xbox. I have heard the tinny VoIP it emits.