IPv6 came up in conversation over lunch this week. Google reports that up to 2% of traffic to its servers are IPv6. It took about 4 1/2 years for IPv6 to hit 1% which it did around February of this year and I guess another 7 months or so to then double (timeframes are imprecise because I’m interpreting a graph rather than looking at the numbers behind it).

Traffic to Google isn’t necessarily representative of what is going on generally on the internet and I’m not sure there is one single source of data on this subject. However you can look at specific internet exchanges to see the trend on their own networks.

DE-CIX in Germany is the world’s largest internet exchange (IX) and a peek at the statistics on their website show a growth trend. As of today, 29/9/12 the 2 day average IPv6 traffic at DE-CIX is at 6.7Gbps which compared with the overall traffic level of 1,430Gbps is still a relatively small proportion.

Anecdotally different ISPs are at different stages of the game with IPv6 with some having to look at Carrier Grade NAT as an interim solution. Equipment aside the main issue is often the fact that automated provisioning and back office systems need redesigning to make IPv6 a scalable proposition. Whilst IANA stocks of ahem IPv4 addresses are exhausted this is not necessarily the case within individual ISPs which is perhaps why we aren’t hearing more scare stories in the media.

Check out this paper on IPv6 readiness written back in 2010.

Chart below is the Google IPv6 traffic growth – links to Google’s own page. 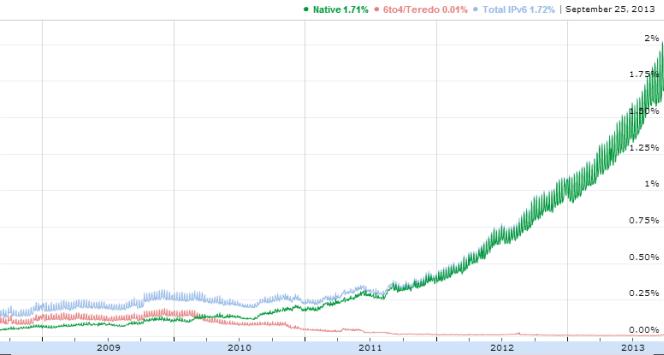