Lisbon farewell.  It was great to see you. Very hospitable were you if somewhat cold but it being February I offer no complaints. 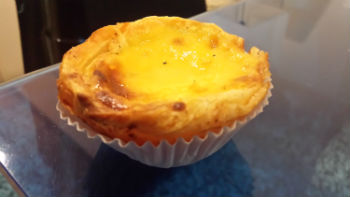 The brandy and the port kept me warm. Your generous portions were gratefully received. The tapas was good. The historic sights of the city were enjoyable, I climbed the castle ramparts and pictured Magellan, Vasgo de Gama and other intrepid Portugese of earlier times setting out on their voyages into the unknown.

As I leave the city, I thad my first experience of the splendid Portugese tart. A delicious custard concoction which made me wonder why on earth I had left it until the BA business class lounge to try one.

This was my first trip to Portugal but do have a Portugese story from my younger days.

When I was 19 I hitchhiked to Greece. It was a great adventure. Not in the league of Vasco de Gama but exciting nevertheless. There came a time, as I was sat in a bar on the beach one night, that  I neededto make an effort to get home.

I was down to my last £25 in travellers cheques. The ferry from Patras to Brindisi cost £20 and the cross channel ferry was a fiver. That left me exactly nothing to live on for the whole journey, from Patras in Greece to the UK. I had a Lloyds Bank cheque book (nothing in the bank) which I could use to buy the ferry ticket from Liverpool to the Isle of Man which was home and also for the train in the UK.

No credit card though.

The next day I bought a ticket to Brindisi and boarded the ferry. As I was leaning on the rail, taking in the sights and sounds of the port, up the ramp came a lorry with “Leeds” written boldly on the side. Ahah I thought – if this was a cartoon the words “bright idea” would appear with a light bulb above my head.

I waited at the top of the passenger stairwell for the people coming up from the car deck and soon enough along came a black bearded ruddy faced chap wearing a t shirt with “Portugal” written on it.

Greeting him with the words “hey you Portugese eh?” in what I thought might pass for a Portugese accent engendered a “No I’m English actually” gruff reply.

The rest of the story involved me feigning excitement, explaining that his was the first English voice I’d heard for ages and could I buy him a drink. Bear in mind that in buying him a drink I was eating into the fiver for the cross channel ferry. I was throwing the dice.

To cut a long story short he was indeed the driver of the “Leeds” lorry, actually came from Wallingford and was happy to give me a lift all the way home provided I wan’t carrying any drugs, which of course I wasn’t. He even got me a free ticket between Calais and Dover by telling the incredulous man at the ticket desk that I was his co driver and paid for my meals en route. Result.

The lorry, btw and fwiw, was carrying a load of water melons to market in London and the driver would occasionally stop to bash them in a bit as they bulged out the sides. They had been hand loaded in a field in Greece by local peasants (presumably, I’m letting the imagination take hold a little here, with the peasant bit). 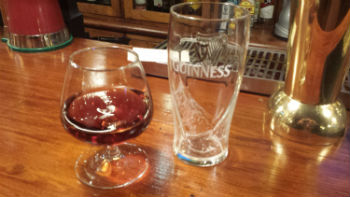 Because of the water melons it was going to take some time to clear Dover customs so at the special roped off driver’s section on the boat we arranged for another driver to take me on to London. I was dropped off about half a mile from my Aunty Mair’s in Mottingham.

That was my Portugal story. I was 19 and hitchhiking was the only affordable way to get there. Now I’m 52 I flew BA business class. Took a lot less time.

Just to round off the post I had data roaming switched off during my time in Lisbon. Connectivity was never a problem. Every bar we went to, and they were numerous over the three nights, had WiFi. Back at the hotel I would charge the phone overnight and at the same time my pics and vids got backed up to Google+. Each morning I’d share the pics with the family back home. Almost as good as them being there with me !:)