During my last fad of running, three years ago, it would have been incomprehensible to have gone for a run without putting on my trainers, shorts, special underwear and lucky T- Shirt – without the addition of a small electronic music player and some headphones.

For some, the generic Mp3 player is there to focus the mind and to exclude the inevitable pain, contributing greatly to the mind over matter approach required to complete a long distance run.

For me, it was used primarily to combat boredom, just as my Walk-man did on 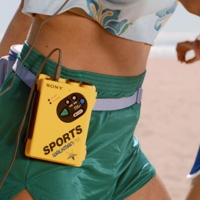 my paper round as a teenager. Thankfully technology has improved and I don’t need a pencil to rewind my cassette of Depeche Mode’s ‘Singles 81 – 85’. Talking of which, I seem to remember Philip Schofield on Saturday morning TV’s ‘Going Live’ pulling an April Fool trick on us. He suggested that in the future we’d be able to have a little stick like machine that you could speak into and it would play out the required song from a memory bank of thousands. Some on the internet even believe that Schofield is the inventor of such devices, I’ve seen more ridiculous conspiracies, although I do believe that the the April Fool is now on him.

Running with entertainment can distract you from the very real dangers around you on training runs – cars, cycles, pushchairs and of course dog-walkers. They are also frowned upon in some official races, believing that the lack of spacial awareness is a danger to other competitors. Although seeing such incidents I have always shunned the notion as its more important to be entertained than bored. And distance running is boring.

My change in behavior was forced rather than welcomed as the decision to start running again was due to me reporting on this grid square for our Lincoln A to Z project. I’ll be commenting on what its like to take part in the Lincoln 10K while running through the grid and for that I’ll need to take my microphone with me. Naturally I don’t want to run with too much equipment, its distracting. Something had to go, and that, is the Mp3.

A friend once told me that he likes to run without music in order to hear the rhythm of his body and the breathing. I dismissed that as nonsense at the time, but stepping out without the music feels liberating and allows you to not only tune in to the way your body feels but the environment around you and this is where I count myself as lucky – close by I have two nature reserves and huge park to run through. I would imagine that only running though suburban tarmac and concrete would be less inviting. It felt great concentrating on breathing and pacing right (knowing when to slow down I found particularly useful). Also without the headphones I found everyone I passed very friendly and keen to step out of the way.

It could be that my enthusiasm for running Mp3 free is that I’m trying to over compensate for actually missing the distraction but for now at least I’m embracing the change and I’d encourage those that are constantly worrying about play-lists, battery life and where to put the wires, to do the same.

Incidentally if you’re ever wondering how important Philip Schofield is, it’s worth noting that his surname passes a spell checker, proof, if proof were needed.

Personally think running is a very dangerous sport that should be restricted to professionals on the telly. It can also turn your mind as witnessed by this bloke who ran last year’s Lincoln 10k carrying a fridge on his back.

I just bought the Depeche mode singles album. Great choice to run with. I like running with a music player. My first Rio player had 30 minutes of storage and you had to be really organised to select what you wanted on advance.

My nano with running clip and Bluetooth Jay bird headsets are the business. Enough tracks to run on and on without repeat.

Races should always be without mp3 though.