Last night I walked up steep hill and was sixty pounds lighter by the time I go to the top. Another exciting episode in the life of Trefor  Davies.

Yesterday morning I walked to work and passed the Harlequin Antiquarian Bookshop as I went down Steep Hill. I’ve been meaning to go in there because I found that when Reader’s Rest closed the Oxford History books that I had been meaning to go in and buy but hadn’t got round to it had been passed up the road to the Harlequin. The shop didn’t open until 11am (why would you) but I noted the closing time of 5 – 5.30 (ish).

Up until yesterday my collection of Oxford History of England books had looked like this: 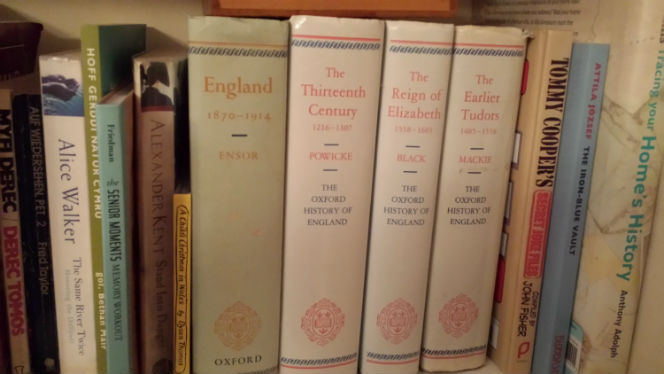 I left the office at around 4.30 (TGIF etc) as one does and took £50 worth of beer tokens out of a cashpoint before striding purposefully towards Steep Hill and the Harlequin Bookshop.

For those of you that don’t know it, Steep Hill is something like a  1 in 2 (well it feels like it) slope that was the main Roman and medieval thoroughfare from top to bottom of Lincoln and vice versa. It has been known, allegedly, for people to take ladders with them when embarking on the ascent and attacking hordes in days of old used to have to use their grappling irons (again allegedly) just to get to the top of the hill before they had even reached the imposing walls of Lincoln Castle.

I maintained a purposeful, albeit progressively slowing, stride until I reach the bookshop which is at the top of the steepest bit of Steep Hill. Good place to stop for a rest:)

In I went and hey presto they had five books that I didn’t have. I purchased all of them at the bargain price of £12 each – they were in good condition – readers of such books look after them. They only took cash so my beer tokens went together with whatever other money I had and I left the shop sixty pounds lighter.

So there you have it. How to walk up Steep Hill and lose sixty pounds. Ironically I had put all of the weight back on by the time I got to the top carrying what felt like sixty pounds more weight – in books – these books are heavy.

I also had to stop at the Post Office cash point in the Bailgate to replenish my stock of beer tokens following which I entered the Prince of Wales public house to spend them, again.

I’ll leave you with an “after” photo of the books proudly sat on one of the shelves at home. I’ve now started on the first one – Domesday Book to Magna Carta. You know it makes sense:) 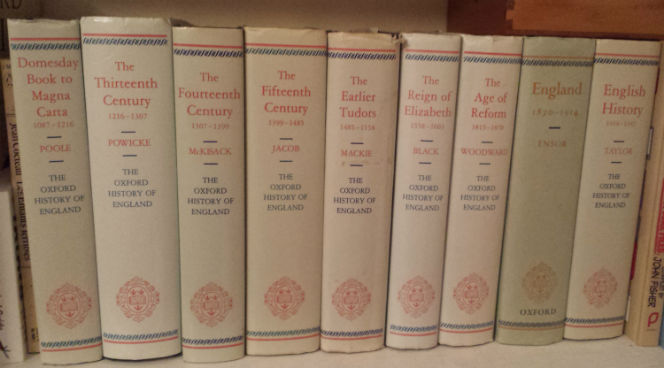 I’ve got 6 more to buy in the series but I think I’ll finish this lot before I start looking again. I’ve also ordered a copy (second hand as they are out of print) of “Hanes Plwyfi Llangeler a Phenboyr” and “History of the Welsh Baptists, from the Year Sixty-three to the Year One Thousand Seven Hundred and Seventy”. Should be good though the latter is an abridged English translation from the original Welsh. I’ll have to pick up the Welsh version sometime.

There is a bookshop in Richmond (the real one, not that Southern imitator) at the top of Castle Hill. That is not only 1 in 2 too, but cobbled….

My office is in Sparkhouse down at the university Rob. Swing by.