Picture of a rib joint of beef before it went into the oven. Today we are having the works: beef (medium to rare), roast spuds and parsnips, carrots & swede, cheesy leaks and I might pop out to get some French beans cos kid4 likes them. I also have some nice beef stock for gravy and a new jar of Dijon mustard. No horseradish sauce – I don’t do it. As a starter we are having smoked salmon then a lemon torte for pud though we might have that after the cheese as I’ve bought a nice cabernet sauvignon and I like to finish the bottle with some cheese, a la mode Francais.

I have of course rung my own mam for a chat. We had our Mother’s Day conversation last weekend. I sent her a card a week early – got the weekend wrong. It was ok. She also got the weekend wrong and had just opened the card before I called her. Now you know where I get it from:) 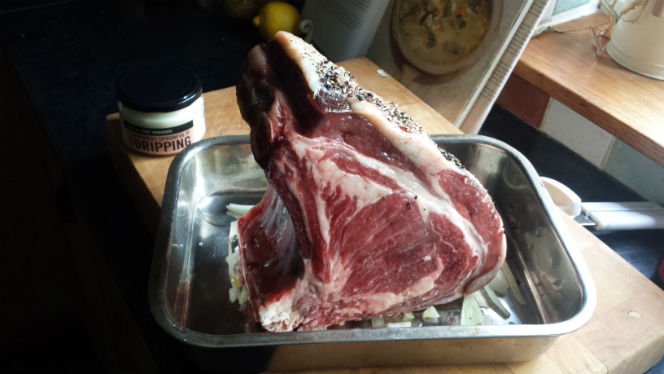