Yesterday in Apocalypse Then, I wrote that having shifted from Mac to Windows upon starting a technical writing gig with TEA (Texas Education Agency) in 1993 that for the next fifteen years I paid “…nary a thought…to Apple and their Mac OS whatever-number.” Well, memory is a cagey, amorphous, and deceitful beast — one that tends to spit out incongruent detail at just the moment when you think you have recollection locked down — because the truth is that I did have one more go-round with Cupertino-designed computers before the big shun took hold.

I decided not long before leaving the U.S. to spend 1994 in Europe that I would use my Apple connections to get a good deal on a PowerBook 165 that I could take along. How novel it would be, I thought, to hostel-hop Europe with a laptop computer in my backpack! I could use it to keep a journal! I’d send emails (CompuServe — I was and forever will remain 72124,3441  — supposedly had modem access phone numbers everywhere)!

The longstoryshort? During the period I spent in the U.K. working for London Underground Limited at the start of my adventure I came to realize the ridiculous reality of moving about with a 6.8 lbs. computer in my pack. Sixteen countries, no less than 3 electrical outlet interfaces to consider, probably a like number of modular connector interfaces, and for what? So I could self-satsifying type instead of write, all while cavalierly pinning a “Stupid Guy with Expensive Toys for the Taking” target on my good self?

Before leaving the U.K. to begin the backpacking half of my year in Europe I offloaded the PowerBook 165 on a London University student for an amount that translated to nearly twice what I originally paid (and the kid still made out like a bandit, as the same system was selling new in the U.K. for a good deal more). Generous guy in other ways, too, as he clued me into Iain M. Banks’s Consider Phlebus. Some things just work out.

So thus began a period in my life I only just now have begun referring to as — cue crashing cymbals — The No Apples for Kory Years, during which all of the following took place: 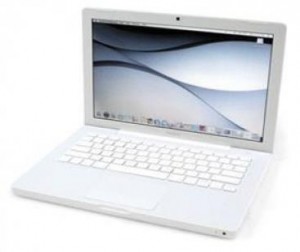 After an unplanned moment spent with an iBook G4 at Sunburst Espresso Bar in New York in January 2008, and following about 8 weeks of hemming/hawing/rationalizing, I finally managed to convince myself that I needed to peek out from behind the Windows computing universe to which I had been long married. Thus, on Friday, March 28, 2008 I paid a late-night visit to The Apple Store at 9th Avenue and 14th Street in New York and walked out with the first AppleKory. My exile was over.

Come Monday, the bashing begins anew with the shattering conclusion of my quasi trilogy. Miss it at your peril!