Having just launched broadbandrating.com I am clearly interested in doing what it takes to build up traffic to the website. The more visitors it gets the more the likelihood of a click through and a commission payment.

We are right at the beginning. This morning I took a look at visitor patterns and it is clear that when broadbandrating gets a mention on social media the site gets a burst of visitors. The chart below shows the spikes when I share posts from the tweeterrific blog.

The big spike on Monday follows the release of the ISP Report for Q4 2014. It shows how you can begin to build traffic. It does help that I engage with lots of people on social media having been active on most platforms since early on in their development. Further spikes follow the publication of blog posts and their subsequent sharing on social media.

Some businesses wanting to promote their own products and services may not have been at it as long and therefore have a smaller network. It does serve as an indication of where to put your efforts.

The visitor acquisition sources for broadbandrating .com currently look like this: 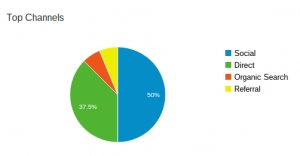 A substantial element of acquisition via social media plus a pleasing number of direct visitors – people going straight to the site. Compare this with trefor.net, a much older site with far more visitors. 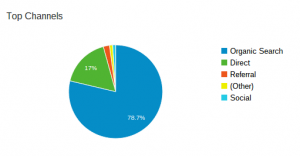 The trefor.net profile will have changed over the years but it does reveal the efforts we have put in to Search Engine Optimisation. Trefor.net also has a cohort of regular readers as may be seen from the proportion of directly acquired visitors.

I’m not sure what the ideal mix is for broadbandrating.com. Certainly we will want the Referrals from other sites to grow together with those from Organic Search. However the good start it has had from Social Media activity s interesting to observe and again is a pointer to how other new websites might begin to engage.

Media exposure is a big factor in all this. On Tuesday night I was on the BBC Radio Lincolnshire Drivetime Show discussing broadbandrating.com with presenter William Wright. Not only did the realtime visitor numbers rise during the interview but his Tweeting also brought a few “favourites”, “mentions” and “follows”. Goes to show you have to have a mix of approaches.

The one aspect of the early marketing activity for this site that doesn’t yet seem to have borne much fruit is the press release. This was home grown and focussed on the output of the ISP Quarterly Report. With hindsight it might have better focussed on the fact that we major on the fact that we use Sentiment Analysis to rate ISPs rather than the results themselves. Time will tell. Had we used an external PR Agency the results might have been different although when we did use an agency during my time at Timico, quite often any national exposure came as a result of personal relationships I already had with the journalists involved. This time around an agency might definitely have helped with the targeting.

Broadbandrating is a fun and interesting project and is the first of a number that you should see emerge during 2015. I’ll report back every now and again on how our various marketing activities bear fruit.