Geeks and prosecco do mix!

I’ve been working within the networking industry since 2007. This isn’t the longest time compared to some of you die-hard industry types, but with my first UKNOF in 2009 I was thrust straight into the fabulous world of ISPs, networking and geeks.

It was an odd industry to join as a young 20-something with a background in midwifery. I had jumped from a world of mums, babies, late-night shifts and a female-dominated workplace to a world of switches, routers, late-night maintenance and more males than I’d previously realised existed.

The strange thing is how similar these two worlds actually turned out to be. It’s true that being surrounded by geeky men (and I mean this in the most complimentary sense possible) has introduced me to characters I’d never have encountered in any other walk of life. In six years, I’ve met some truly strange and fabulous people, and there are even those I’ve met for the first time on multiple occasions (more on this later). It’s also true that I found being the only woman present at a several-hundred-strong conference can be intimidating. But the story I want to tell isn’t one of sexism: it’s of a community of geeks that includes both genders and is becoming more welcoming all the time.

When I first made the shift to the geek-world, there were times when my gender made things harder. Some of my male colleagues couldn’t seem to speak to me or even look me in the eye; some thought I must be a sales person; and others assumed I knew nothing about the industry. Initially, of course, those few were right, but not because of my gender. I lacked experience, and the vast majority of the people I met were very kind about that. They helped me to learn. And in some cases, I suspect that being female made it easier for me. I was such a rare commodity that they easily tolerated my presence and my questions: even the silly ones. And the more enlightened amongst them realised that the silliest questions are sometimes exactly the right ones because they come from a place without assumptions based on specific experience.

Over time my knowledge grew and my face became familiar. For me, the names around me got faces or sometimes the faces got names and a lot of the companies became suppliers or customers (occasionally both). More recently, turning up to events is about greeting old friends but that didn’t happen overnight. It was a gradual process that happened through the industry’s many events.

Many of you will be familiar with the set-up at UKNOF, LINX, LONAP and various smaller geek meets, but those who have never attended might appreciate a brief description. These are not standard sales events or even networking events where your whole purpose is to meet people who might get you the next step up the corporate ladder.  Instead, these events are about the free exchange of ideas; a place to meet up with the real brains behind the internet in the UK. You are uniquely able to hear technical talks about the new ideas that companies are implementing, hear predictions about where things could be heading and encourage strong relationships between companies working together to push the industry forward.

The real work, however, gets started when the day finishes and everyone heads off to the pub. It’s a chance to chat to presenters about their chosen subject and offer a two-way dialogue. The first step, of course, is to congratulate them on a great talk with the gift of beer, and from that beginning some of the most inspirational ideas can be generated. Increasingly, for me, it’s a chance to catch up with friends from conferences past that I had not seen for months or years, and to find out all the great (or sometimes not-so-great) things they have been working on. 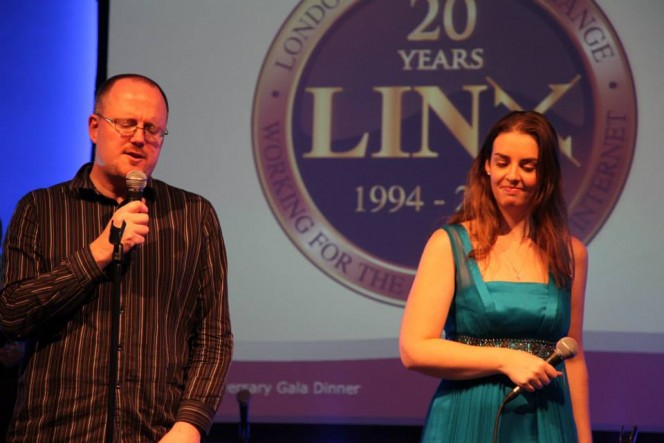 Of course, there are also always going to be those awkward meet-ups where I am re-introduced to someone who has no memory of me whatsoever. I can think of at least two guys that I have met and talked to on two or three occasions before they had any clue who I was. Some of them I suspect remembered little because eye-contact was actually beyond them, and it’s quite hard to put a face to a face when you’ve never seen it. Others perhaps have so much going on inside their heads that the memory had been pushed out to make room for some router config that was way more important. Either way, it can be disheartening when someone doesn’t just forget your name: they forget that a meeting has happened at all.

But the message to take away from this is that it isn’t just about gender or lack of respect. Geeks of all kinds can be prone to finding social situations challenging, and by perseverance, I became a known and respected member of these circles.

As my involvement in the industry developed, so did my love for new pursuits. I think the key driver for being part of this field is a thirst for knowledge and a keen interesting in trying something new. I’m fascinated by new technology but have you ever noticed how an interest in the new and old go hand in hand? My interests started to broaden and I soon realised that there was fun to be had with these geeks. I’m not ashamed to say that I love steam, old buildings, grand Victorian engineering and board games (yes, even the really geeky board games). The more pumping-stations and heritage railways I visited, the more I realised how fascinating these places were. Working in a highly technical field meant that I appreciated the engineering more and more. 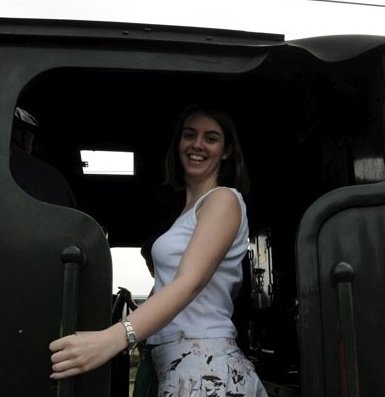 Then in 2013 I had been invited out to London for a Friday night gathering and found myself at a loose end on the Saturday. So I did what any single young female would do when she was on her own in London: I went to my favourite steam museum. I was lucky enough to have a suitably geeky friend willing to accompany me and to run around after me as I excitedly gave him a tour. At that point there was no doubt about it: I was a true geek. I had tried to hide it for the whole of my life but my colours were out.

Now I’m proud to admit that I’m a geek who has probably been to more heritage railways than most train enthusiasts. This Valentine’s Day, I took my boyfriend to the same museum. Although I sold it as a treat for him, I can assure you that there was no difference in the enjoyment we got out of it.

Six years into my career-change, I’ve found that respect often comes from being like-minded. People like those people who are similar to them, and I have embraced those geek tendencies. On top of that, I don’t mind getting my hands dirty and that can often go a long way in helping a project move forwards. I’ve slept on data-centre floors, bruised my arms shifting equipment, racked servers and even accidentally knocked out the occasional very important cable (which I’ve come to realise is a rite of passage). I can remember, clearly, a ‘quick trip to the DC’ at the end of a big project where I realised that the vital fibre link between the racks hadn’t been run by our contractors. Without hesitation I spent 12hrs in the DC single-handedly running bundles of fibre. I often wonder how many times I climbed up and down the ladder, but it was too many times to count. Somehow I managed to get the project finished about thirty minutes before the customer arrived on site, and it was worth a gruelling stint to achieve that.

So this post was ostensibly about sexism in the industry. I can tell you a great story about everyday sexism in B&Q if you like, something so shocking that I really didn’t know what to say to the guy. If you are interested in knowing more just comment below and I will tell the story. But beyond those initial awkward encounters and the occasional assumption that I was just in sales, I couldn’t tell you a single industry-related tale. You might want to read about how I battle with male chauvinism every day as part of my job but I can’t tell you that. I work in a male-dominated industry every day and I enjoy every minute of it. I’ve been in charge of multi-million pound network roll outs and I’ve presented every week to a boardroom full of men. I’ve been in charge of teams of network engineers, software developers, cabling engineers, support desk engineers and systems engineers, but not once felt belittled or patronised.

How this has happened I can’t say for sure. I would love to put it down to the way I work. I’m honest when I don’t know something, I’m firm if disagree with a decision, I value peoples’ opinions and I’m willing to learn. I join in with office banter, enjoy the same pursuits as the guys, work hard and avoid at all costs using my gender to influence others.

But I think that in truth it’s about the industry itself being ready to accept women as much as anything else. Over the years I’ve seen big changes. I’m no longer the only female at conferences. There are a whole bunch of us now and as far as I can tell the others are just as passionate and dedicated as I am. It’s great to have some female company to even things up a bit but we need to do more to encourage women to get passionate about networking.

Over the last six years I have realised just how rewarding working in our industry as a women can be. There are some great female role-models so take every opportunity to talk to them, learn from them and emulate them in your own way. They have worked hard to get where they are today.

In short, I love the ISP industry. Wherever life takes me and whenever I wander off I always come back with a passion even deeper for my love of the people, the tech and the vibrancy of an industry that is constantly going from strength to strength. It is driven by a great bunch of people who should be proud of all they have achieved.

I was always a closet geek and I just needed some help to realise it.

Liz Fletcher is a trained Midwife; cable monkey; Project Manager; prolific prosecco drinker; part-time steam train driver; and occasional singer. As of 3/8/2015 she is looking for a new challenge.

Other Women in Tech week posts include:

How to bypass an ISPs filter