Last year I created the B4RL Facebook page. B4RL stands for Broadband 4 Rural Lincolnshire. Seemed to me we needed one aka B4RN (Broadband for the Rural North) and B4RDS (Broadband for Rural Devon and Somerset). B4RN is by now world famous and B4RDS is becoming a place for heated discussion with people who have very clear views on the availability (or lack of) of connectivity.

I occasionally get contacted by people local to me looking for help getting connectivity to their communities. Usually the brick wall is backhaul cost. Lincolnshire folk don’t generally seem to be particularly demonstrative when it comes to broadband. It’s usually constrained to social media outcries when their broadband stops working, as the technology periodically tends to do.

B4RL however has turned out to be a good place to follow relevant news in the broadband space because a number of stalwarts post to the timeline on a regular basis.

This morning it’s all about The Culture, Media and Sport Committee visit to Russell’s Water Village, as part of its inquiry on “Establishing world-class connectivity throughout the UK”. The visit has already met with a hiccup as you can see from the tweet:

This week has also seen a link to an article in the Telegraph on the best and worst places to get broadband in the UK. Amazingly my home town Lincoln comes near the top. That’ll be my 200Mbps Virgin connection driving up the average. 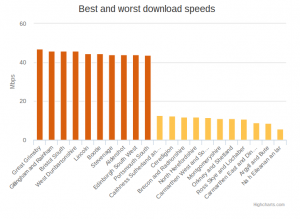 The difference between the best and the worst is really marked though. What’s more  we have to consider that to get an average a lot of people must be seeing far worse speeds. Also this probably doesn’t recognise that many households won’t be getting broadband of any sort.

There are lots more good articles on B4RL. What I really wanted to get to was the issue of what is to be done about broadband access and speeds and why we need to do anything..

There is a valid argument that nobody yet needs a 1Gbps connection aka the services of B4RN, Gigaclear et al. I doubt that I ever use my 200Mbps to the full. It may be argued that over and above a certain speed (say 10Mbps per person) what is more important is the contention/congestion on the service provider’s network. That’s as may be but the real point is that as a nation that needs to compete and be innovative in the big bad technology ruled world we need to have that cutting edge.

This is one of the reasons why large content providers are members of Internet Exchange Points like LONAP where their traffic gets the benefit of faster connectivity.

It may be about speed in the headlines but behind all the hype it’s about money.

The same logic can be applied to broadband connectivity. I found this Forbes article from 2012 that claimed that GDP increases by 0.3% with a doubling of broadband growth. Now I’m sure that there will be lots of caveats and conditions associated with this but the general message seems to be clear.

The problem is that this isn’t a BT or a Virgin issue. Apart from the fact that B4RN and Gigaclear have shown that it is very much doable to provide 1Gbps to the home economically (£30 a month for a 1Gig connection – I’d say that’s hugely competitive).

BT’s job is to generate value for its shareholders and not to underpin the economy. This is a we the people issue. Why should the UK wait for BT to decide that there is indeed a business case in providing FTTH, which is what we are talking about. Fibre all the way to your house.

UK GDP at the end of 2015 was around £1,787 Billion. Last year Ofcom told us that the average UK broadband speed had grown to 22.8Mbps by the end of November 2014. If everyone was getting 1Gbps that would be over x 25 growth or, if for the sake of a number we use the Forbes 0.3% figure, a 1.5% growth in GDP.That would take GDP to £1,814bn or a growth of £27Bn which is funnily enough roughly what the Caio Report in 2008 said that rolling out nationally FTTH would cost. Bear in mind this figure would be based on BT type overheads and costs.

I don’t have a problem with investing for the future. The government’s problem is that it can’t see how an investment in digital infrastructure would generate growth. It can’t work out the numbers. A capital project such as HS2 has an established business model that bean counters can bet their brains around. The brave new digital world is a mystery to most of them. They aren’t necessarily to blame as it’s new for everyone. What is lacking however is vision.

There is something else lacking. If you talk to the folk at B4RN they won’t touch government money with a barge pole. This is partly out of bitter experience.  When they were starting they were ignored by the establishment in favour of BT when it came to the distribution of funds. BT being seen to be a “safer” pair of hands. It is also because government money comes so wrapped in red tape that accessing it is seen as too much effort to get to.

So somehow the MPS on the Culture, Media and Sport Committee visiting Russell’s Water today need to be provided with a message they can take back to Westminster. A message that says “raise your game UK”. Let’s be seen by the world as being visionaries and not just by a few people in government trying to spin a story.

The CartoDB  website is useful if you are looking for data on your local broadband speeds.

Spot on post tref. telling it like it is. The cartodb site hasn’t got owt on it about any gigabit speeds in the uk. where do they get their data?

Dunno where they get their data from. I just followed the link from the telegraph & didn’t have time to drill in.

A minor point that B4RDS is the two neighbouring counties of Devon and Somerset.
I certainly agree that BT, as a commercial entity, should be primarily interested in obtaining shareholder returns, unless perhaps when it undermines the National Network’s reliability through poor or non-existant maintenance; e.g. not replacing the lower reliability agre-hardened aluminium alloy cables. However I do take strong issue when BT are gifted with taxpayers’ funds which are then used to enhance BT’s monopoly such as with FTTCs and shared asymmetric fibre. I also cannot understand their accountants attitude in NOT paying say £50 for the required second tie cable duct and then squander thousands to re-excavate the same trench sometimes damaging the first duct AND delaying that operation sometimes for up to 12 months.

I agree with Chris, the data on that site is pointless. Apart from being old it’s the level of detail that matters.
Walter – If any limited company is given funding isn’t shareholder returns part of the way they work?