Ever wondered how they go about deciding where to put a new cellular base station?  It’s a fairly complicated process. It’s also very much site specific, awkward locations, landlords, etc. but as an average the following table is a fair reflection of the effort (source Accelera Mobile Broadband with some O2 validation).

Now just imagine the urban 4G/LTE scenario  we have been discussing, where there are ten times as many small cells as in the existing macrocell model. Research org ABI has forecast that there will be 5 million small cells by 2015.

That’s a lot of site surveys using the traditional model. A lot of man days. The only sensible answer is to deploy Self Organising Network. SONs seem to have some way to go before they are mature enough for full scale deployment but there is time, in the UK at least.

A SON has, in theory all the features you might expect from the name. Cells should self-configure,  regularly self-optimize parameters and algorithmic behaviour in response to observed changes in network performance and atmospheric conditions.  Self-healing mechanisms can be triggered to temporarily compensate for a detected equipment outage whilst waiting for a permanent fix. Nirvana really – plug and play. As we have already found out in the lamp post story plug and play is probably some time away but it will come. 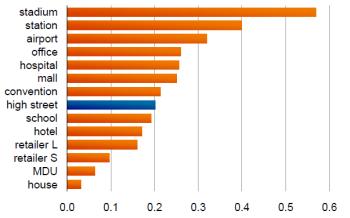 Ok the stats come from

END_OF_DOCUMENT_TOKEN_TO_BE_REPLACED

In the wifi hotspot game first mover advantage is becoming critically important. Experience shows that landlords everywhere are initially happy to allow a network provider into their mall/stadium/building. Once in however they decide they don’t want the hassle of doing it again or don’t really like the infrastructure they are now stuck with but have to keep.

As a result there is a market for the first movers in reselling capacity or subletting space on their infrastructure. We are therefore seeing a land grab in places around the world where operators are snapping up as many sites as they can.

In London The Cloud is looking at 1 hotspot per 200 persons. Time Warner is putting 15,000 wifi access points in Los Angeles and PCCW have 10,000 hotspots in Hongkong where peak time traffic has 50% going over wifi instead of mobile networks. For PCCW in Hong Kong their resold wholesale wifi capacity is their single biggest revenue stream1.

O2 is rolling out massive coverage in

END_OF_DOCUMENT_TOKEN_TO_BE_REPLACED

The mobile networks are built up from thousands of base stations around the country, connected back to the operators’ core networks using a variety of backhauls. Once the media hits the core network the voice/data session is directed as appropriate.

The backhaul technology has developed over time from E1s/ATM to Ethernet (fibre) with wireless connections thrown in where necessary.

Base stations, known in the business as Macrocells, contain the transmission and battery backup equipment to support a variety of call and data handling capacities (typically up to 250 simultaneous users) dependent on location. This equipment has historically taken a lot of space – it would probably fill the average master bedroom at home, requires expert installation and, because there is a mast involved to hold antennae at some height, needs Local Authority planning permission.

Technology developments mean that this kit can now fit into a single wardrobe.