Nice bit of lab kit we have just installed downstairs. This is a datadomain DD630 backup storage device.  You can see that it has 12 x 1TeraByte hard drives – that’s quite a chunk of storage compared to your laptop or desktop PC.  The box above it is running test servers using VMware (click on the header photo to see it all).

This is all lab work being done in preparation for the new data centre when it opens in January. The twelve 1TB drives result in around 9TB of useful space once RAID, hot spare and storage of the OS are taken into consideration.

The beauty of this though is that we are likely to be able to store far more than 9TB of real data once it has been “deduped”  – for example identical copies of operating systems removed. In our trials we are backing up some VMs and are seeing 2TB of data being compressed and deduplicated down to only 140GB on the datadomain. We won’t necessarily get the same savings when the system scales up but it is easy to see that it is an attractive piece of kit. 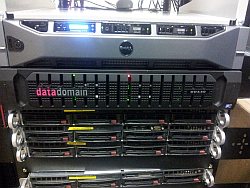 One of the nice features is that if you lose your primary VM server then the system allows you to boot from this backup whilst it rebuilds the original server in the background.  This can save a couple of hours of work – very valuable in  a problem situation.

As we start building out the virtualisation platform I’ll do some more update posts. The inset photo is the same kit with the front cover on.