Doing my usual plugging in the laptop routine this morning I noticed a label attached to the Microsoft keyboard with a health warning.  It was one of those Alice In Wonderland type moments. Something like the time when Alice spotted a cup with a label saying “drink me”.

I’ve had the Microsoft keyboard a few months ago but only today noticed the label1 . This directed me to read a health warning under the keyboard and blow me down there it is as bold as you like on a 2″ by 3″ label (that’s 5cm x 7.5cm to European readers). 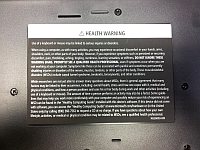 hand, arm, shoulder or neck discomfort that might be ascribed to a poor posture when typing at the Microsoft keyboard. To my horror I found I was suffering from all the problems warned of on the label.   These are however more likely caused by a lifetime of bodily neglect rather than the Microsoft keyboard itself.

Anyway there isn’t much point to this post other than it starts off another busy week.

1  Editor’s  note –  I’m not sure there was anything to suggest that Alice herself had only just noticed the cup and that it had been there in front of her very eyes for months.

PS I am far more likely to have problems with what I type than how I type 🙂 I also wondered whether the twinge in my knee might also be down to using the keyboard but decided probably not.