I woke up this morning, my radio sounded bad, oh yea! It’s true. Radio4 DAB sounded very crackly. I switched to FM and it was OK. I tweeted about it.

By return of tweet I found out that others had the same problem. I’ve just slotted in the tweets below. They aren’t necessarily in the correct chronological order because different people were responding to different tweets at different times but it certainly shows that there would appear to be a problem. Radio4 FM was also noisy in the car on the way in to work.

We periodically have problems with DAB which on reflection I would never swap in preference to  FM. It’s only benefit is that you can get more channels. If anyone can explain what is going on in the airwaves then please feel free to comment.

Large amount of radio disruption in West Norfolk this morning. Woke to a German radio station rather than the local one! #Funkstörungen

@awooster @tref Time to get radio apply and listen on 3G and mobile phone.

@Arable_Farmer @tref @JRainy @clive_parker only discussing with my Dad yesterday about adapting the aerial to it lengthen for better signal. 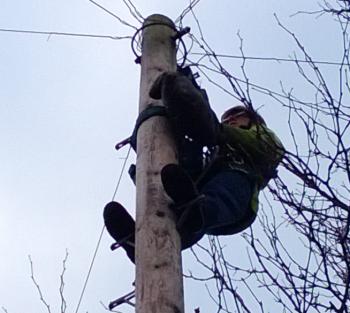 It’s a complicated old game, broadband. Ethernet is far simpler. You connect a length of fibre to  router at one end and one way or another it gets back to a bigger router at the ISP’s core network somewhere and hooks you up to the internet/intranet/wherever you want to hook up to. I realise that’s a simplistic way of putting it but basically that is it. it doesn’t matter if it rains or blows a gale. Fibre doesn’t normally mind.

Broadband is different. Broadband is made up of copper cables, aluminium1  if you are unlucky. Even fibre broadband, as the BT marketing hypers like to call it, is not usually fibre. Fibre broadband is, unless you happen to be one of the few with Fibre To The Premises, carried over copper in the last critical few hundred yards to your house.

So fibre broadband, or Fibre To The Cabinet, has some copper. Now don’t get me wrong. I’m not complaining. Well actually I have been complaining. My home broadband performance had dropped right off from the 53Megs down and 11Megs up to at times a pathetic 6Megs in either direction.

Fortunately I have “a man who does” named Adam Rutter who leads one of our tech support teams. The BT System had rate adapted a line that could theoretically hit 80Mbps (I never expected it to do that – I am a few hundred yards from the cabinet). It normally does this if it finds errors on the line – the speed is adjusted to a point where the errors disappear. In my case the line was synching at 15Megs. Nogoode.

Adam knew there was something wrong and called out the cavalry in the guise of BT Openreach. The engineer arrived at the appointed time (good) and I hung around whilst he ran through some tests.

Now one thing you should know about a copper broadband line is that it was originally designed to carry your voice via analogue electrical signals. The specification for the copper telephone cable is therefore based largely on the parameters needed for your Aunty Mabel to hear your dulcet tones without having to put a bigger speaker in her hearing aid. Broadband hadn’t been invented in Aunty Mabel’s day (may she rest in peace).

When the boffs at the BT came along and said “Eureka we have read this article about something called ADSL and we think it is a good idea” they were stuck with a copper line that had a pre-Mabel date on it. That line spec, SIN349 for the purists amongst you, was designed to keep Mabel the inveterate talker happy on her Plain Old Telephone line and not Mabel the Skyper who loves to video conference with her nephews and nieces who in turn indulge their auntie because she shells out at Christmas and birthdays.

Now I’ve had Openreach out before to check my line and it has always passed their tests. This time I explained in no uncertain terms that there was something wrong – the evidence being in the speeds I was getting. I know it wasn’t congestion on our network and I also know how BT manages the capacity at the exchange so it wasn’t going to be down to congestion there.

Tim Drake, the Openreach engineer realised that there was no point in performing the normal line test – it would have passed. He got on the blower to their operations team and asked for the limits on my line to be lifted (the limits imposed to prevent line CRC errors).

My internet access speeds shot up, as expected.  However it didn’t take long for the errors to return. Tim spent the next hour or so testing the line looking for the source of the errors. He eventually found it at the top of the telegraph pole down the road from my house.

“Eureka” says I. Tim finished his stuff up the pole and brought down a piece of cable that showed corrosion on both strands of one pair. These wires, rubbing together in the wind and rain would have resulted in noise that was the cause of my errors and the speed downgrade. Mabel and her yakking on the Plain Old Telephone would not have been troubled by the problem. Mabel on Skype would.

My FTTC line is now back a lot nearer to where it needs to be and I am a happy bloke. I am next week having dinner with a senior team from BT and I intend to specifically commend Tim Drake for his efforts. Openreach broadband engineers have a budget of one hour to fix each problem.  Mine took two hours and Tim could have walked away early on in the process with the throwaway observation that the line was in spec and there was nothing he could do.

This he did not do and he now has a happy customer. He is a good man. He cares.

The only real answer to all this would be for a total network rollout of Fibre To The Premises. Whilst I am not saying that fibre is totally immune from the environmental problems that affect copper it is far less so. Ubiquitous FTTP ain’t going to happen any time soon, we all know that, but perhaps this blog will be used one day as an illustration of the issues that dogged that historical piece of communications antiquity, the copper telephone line.

Thanks Tim. The photo is of Tim up the pole.