IPv6 is very much in vogue at the moment.  test-ipv6.com is a useful site you can visit that tells you how prepared you/your connection/your ISP are for IPv6.

I’ve run some tests on two connections for you to compare the results. One is IPv4 only and the other dual stack IPv4/IPv6. The difference is self explanatory.

The site itself will tell you that the most important test is the Dual Stack DNS. If this one fails or takes too long then you will have problems once people start rolling out IPv6 only sites. Clicking on each image will bring up a larger version. Both sets of tests come from Timico connections  – the one on the left is dual stack and the other IPv4 only. Also click on the header of this posts if you want to see more of the successful test results. 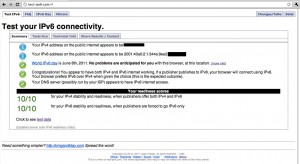 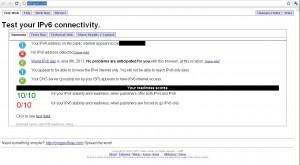 Just sitting in on a BT webinar on 21CN testing. According to BT they are spending £150m on testing 21CN broadband related devices and networks.

The scope is a lot bigger than I had thought before I sat in on the call. The ADSL related bits, which is my main interest, looks as if it will largely be unproblematic. However when you think about it there is a huge list of equipment out there that has been plugged into the BT network over decades. There is bound to be a problem somewhere.

Initial feedback is that some security related services might have a problem that needs attention. Also one very old PBX whose name escapes me (it’s that old).

A couple of PBXs would appear to have been successfully tested from manufacturers Aastra and Alcatel Lucent. Clearly there is a long way to go because most of the big guys are not in this list. BT does have a proactive programme to contact the top ten manufacturers.

I don’t have a specific list of manufacturers that are being contacted. However if you think that your’s might be from a small vendor who might not appear on the list let me know and I will happily effect the introduction with BT.