Ambitions come and go, and they generally tend to go unfulfilled as a sense of reality creeps up as you mature. Of course, the dreams are still there, though you do have to alter them accordingly. I’ll no longer be a 100m world record holder, but in theory I could be the world darts champion. I’m never going to present the Radio 1 breakfast show, but I understand that community radio is a much more creative experience than being required to play Rihanna on a loop (although less popular). 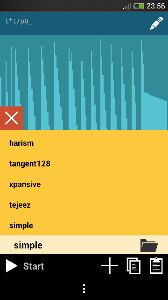 Since I first knew there was a top 40 music chart I have wanted to have a Number One hit. My brilliantly named first band, The Streaky Boneheads, was formed in drama class at school, and because we had no instruments we mimed them and our visions were big. Naturally, the band split as we parted ways into employment and further education. The Number One ambition still gnaws away at me, though, and with bands having come and gone I now resort to ideas for novelty records, something that annoys most music lovers but that a a fad has the potential to grab the attention of the few thousand people needed to become a Number One recording artist in 2014.

Given a spare ten minutes I can be found sprawling over, downloading, experimenting with, and quickly uninstalling, some app or other that may or may not be the key to producing a chart topper. This habit is what led me to the Google Play Algorithm that suggested I try DroidBeat Synth. The product had good feedback so I gave it a spin. 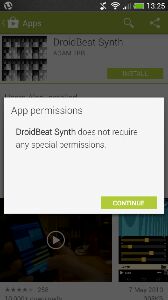 To quote the late, great, Factory Records genius, Tony Wilson, what I got out of DroidBeat Synth was “like listening to a headache”. Droidbeat describes itself as a simple open source app, so with the right programming and patience I’m sure that someone could engineer the existing sounds into something preferable, like the scratching of nails down a blackboard. It’s not for me, though, as I’m very much the end user – a want-to-push-a-button-to-play-the-drums kind of musician.

DroidBeat Synth is significant for me, though, as its the first time in two years of regular app installation that I have seen the screen at the left.

They don’t want anything from me, and I find that very refreshing. Even so, I got rid of the app and now I’m  off to get The Streaky Boneheads back together for a comeback tour of pubs with good dartboards. Wish us luck!