At my age, you would think that I would be long past adolescent self-consciousness; that I wouldn’t feel awkward with the geeky way of thinking. A girl that I had a crush on back in the 2nd Grade said to me, “You talk funny. You talk like a scientist.”, referring to my vocabulary. At that age this wasn’t a compliment, nor was it really a criticism. It did not, though, bode well for any potential romantic entanglements.

On the way to the conference I find myself sitting next to two attractive, well dressed middle-age women, three abreast in the aisle seat. We start the long first leg of the flight with a little small talk. We are flying together from Dallas to Albuquerque, where they will leave the plane prior to its flying on to Seattle (my destination).

“What’s in Seattle?” they both ask.

I feel like I’m on my way to band camp. What do I say to them? I tell the truth.

“I’m going to speak at a conference on Content Management – a technology conference.”, I say.

“Oh. Technology stuff.”, from which they return to conversing among themselves for the remainder of the flight. It’s fine. I wanted time to think, anyway, to be quiet on the plane so that I could figure out what I am going to talk about at the conference. I booked the conference before deciding to leave my last corporate job. I opted to keep my commitment, though, and now I need to put my presentation in my own voice.

The plane is landing in Albuquerque. The small talk starts again, and it turns out that the two women also live in Austin. I hear them say something about two local radio hosts known as JB and Sandy. I ask a question regarding Sandy. They fill me in. It’s friendly, partly because we’re parting way in five minutes.

Nobody sits next to me on the Seattle leg of my flight, and I have time and space to think, to figure out a theme for my talk. I’m basically speaking on the lessons learned over the last year as a software team trying to buy the next generation of the solution instead of building the next generation of solution.

I arrive in time to enjoy a day and a half of palling around Seattle prior to the start of the conference with a friend who — by coincidence — arrived at roughly the same time I did (and who is scheduled to leave at the same time I am leaving, as well).

Soon enough, though, it is Monday morning and I am listening to the conference’s keynote address, which is being given by a guy who left his corporate job to research and write about the need for human warmth in product development. Wow. Another coincidence. That’s what I’m doing.

By the end of the second day, the coincidences have piled up so high that I feel like I should head for Vegas. Everything is coming my way. Lucky encounter after lucky encounter; one amazing conversation after another. I’m meeting just the right people at just the right time. I’m not forcing anything. I have no agenda. I am in flow.

And then…a woman from Oracle, sporting Google Glass. She’s shopping it around. Before today, I didn’t even want to read about Google Glass. No interest. None. (I’m not usually interested in 1.0 anything these days.) But I’m in flow. I’m being open and receptive to new ideas.

The Oracle woman gave me a two minute demo. I put it on. Fired it up. And now…I wanna know how I become an “explorer.” Sign me up!!

I share my newfound desire to be Glass Explorer on my Facebook page and, of course, this gets the attention of the one friend I have who is critical and negative about everything (she’s a hater, and she doesn’t even know it). Her FB comment:

Another friend, one who used to be the director of development at Nokia offers a more insightful comment:

What made you change your mind? I am pretty skeptical myself.

Think about this…. you are just seeing the awkward pre-commercial release. How many of us dissed those bulky cell phones of the 80s as pretentious? The potential this represents is for a whole new generation of technology – a whole new way of relating to our technology devices.

There is already a contact lens version of Glass that can detect glucose levels in the body without any need to draw blood. The device can send a signal to an insulin pump. Think possibility. The resistence of most people (as far as I can tell) is a resistance to being so reliantly on something that makes you look like a member of the Borg. But think about how people already deeply attached to technology and devices, just lose you phone and internet access for 2 weeks. How many phone numbers do you have memorized?

Imagine a phone that you hear through bone vibration. Google Glass does that.

Imagine sheet music appearing in mid air for musicians. Google Glass does that.

Imagine doing everything that you do on your phone now, but without an external device to carry around. Well, Google Glass doesn’t do that yet. But how long? A year? Two years? It’s a done deal, my friends. 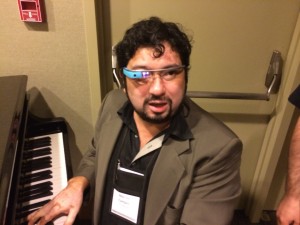 For me, the conference was a success. On the way back to Austin I connect again in Albuquerque. The two seats next to me remain empty as people pile into the plane. It’s Southwest Airlines. Open seating. Finally, two women take the empty seats…coincidentally (believe it!) the same two women from the outbound flight.

“Well, hello. How was your stay up in Albuquerque?”, I ask.

“Oh, we went up to Santa Fe. Kay has a place up there that she rents out.” one of them responds. I later learn that her name is Jen. Kay and Jen.

The three of us end up having dinner together and talking during the entire three hour layover in Denver. By the time we get on the plane back to Austin we are linked arm-in-arm, giggly from the wine. We’ve discovered that we have some very close friends in common. We discover that we have a lot in common. Yet another coincidence.

I tell them about Google Glass. They are fascinated. Maybe being a geek ain’t so bad. It’s like this one time at band camp…well, you’ve all been to band camp, so you know what I am talking about.

One reply on “Band Camp Coincidences”

Yes, the future is coming. So many great things in store once we all have fit for purpose connectivity.