Stop right there! Before you go any further I know what you are going to say. “I’ve always had my head in the cloud”.

But no 🙂 . What I mean is that we are just moving trefor.net into the cloud. More specifically onto a Xen based virtual server on a resilient hardware cluster. I might say this is to cope with the increasing load imposed by the growing number of visitors but this isn’t totally true, or not at least the main driver.

As much as anything you have to practice what you preach and on this occasion this is what I am doing. Thanks to Ian P. Christian (Pookey) for his help with this.

I can see clearly now the cloud has come… 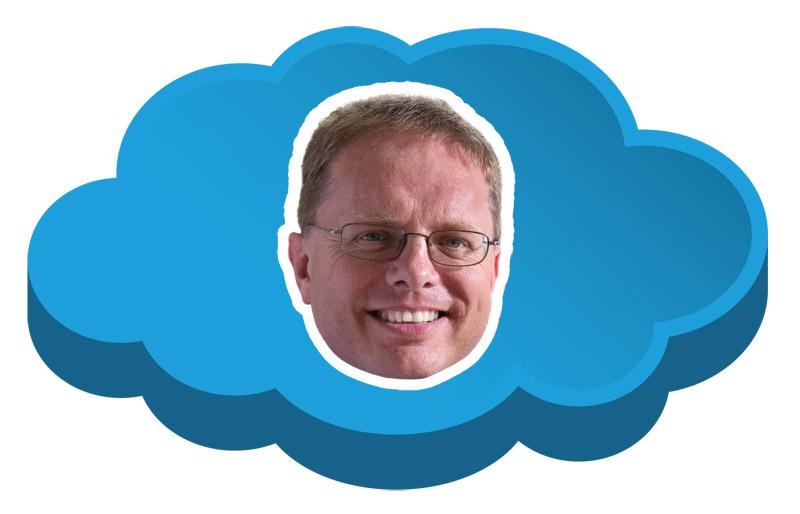 So should you worry about using a service — one such as Salesforce.com’s Force.com, for instance — in “The Cloud”?

Ten years ago Oracle was ahead of its time when it tried to kill off Microsoft with the Network Computer. At that time it was a combination of the cost and reliability of the underlying network together with the lack of applications to run on it that likely killed it off.

Today these barriers have all but disappeared. Connectivity is orders of magnitude cheaper and the number of uses for the network has exploded.

WordPress, for example, is the platform that I use to write this blog. WordPress has 6,760 plugins available for download and they have indeed been downloaded 52,448,569 times to date.

A plug-in or widget is a small application that is used to run on a platform to enable certain functionality. In the case of trefor.net these applications provide the functionality in the right hand column – twitter feed, add/subscribe etc. I also use applications invisible to the reader such as wordpress seo, search engine optimisation.

I think nothing of using WordPress which is a totally cloud based application, unlike Dreamweaver for example, which at one time I used to use to design websites and which resided on my PC.

So as a final note on the Salesforce.com CIO council meeting last week I thought I’d look more into their cloud offering. The Salesforce.com Force.com platform has have 200+ native apps and 550+ partner apps. Not as many as WordPress but there again many of the WordPress plug-ins will never see the light of a real website and they are free.

The Force.com applications that are used, however, are of major interest to business, at least collectively. They must be because Salesfor.com has 63,200 paying customers with 81M+ lines of code with 16M+ customizations – modification that integrate the Force.com platform with other services used by these customers.

New WordPress plug-ins appear daily whilst Salesforce.com restricts itself to three releases a year – coming up to release number 30 this Autumn. In the business world a software release needs to be bug free as possible and fully tested which is certainly not always the case with open source equivalents.

So it is clear to me that the move to the cloud is well underway and anyone looking at their information roadmap strategy should have this at the forefront of their mind. Of course this isn’t going to kill off Microsoft anytime soon…

You may or may not have known that I am on the CIO Council of Salesforce.com. Salesforce.com is a highly professional organisation that I believe really has its head screwed on.

This isn’t a sales pitch for them but I was sufficiently enthused by my Cloud Workshop day, held yesterday in the East Room on the 7th Floor of the Tate Modern Gallery on London’s South Bank, to gush in this post.

The meeting was attended by twenty five or so persons including some global cloud experts from our hosts but also by some heavy hitting CIOs from major international corporates.

What astounded me is the pace of the move away from Microsoft and towards Linux, Google Apps and, of course, Salesforce.com. Their cloud platform Force.com now has 750 Applications you can download. I don’t think anything in this cloudy world comes free but there are seriously well documented business cases and high returns on investment for treading this path.

In the interest of keeping my posts short I’m going to gradually trickle the seven pages of notes I made on the day into discrete bites on this blog.There are lots of really interesting tidbits. Like for example the market for cloud computing is worth $162Bn and that analysts claim that Salesforce.com has a 2 year market lead on its competitors.

I’ll finish this one by thanking my hosts for a very rewarding day and a splendid meal afterwards held in the privileged environs of the Poetry and Dream Gallery on Level 3 which included a couple of Picassos (The Three Dancers) and a Jackson Pollock.

I’m doing some research into Virtual Machines, storage trends and cloud computing. I’d be interested in hearing from people who use these services, thinking about using them or from software vendors offering solutions in this space.

I’m particularly interested in who is using such products in the UK. Timico already offers these types of services but I’m looking at expanding this area of activity and would welcome input with product definition and market segmentation.

Anyone wanting to contact me can either just leave a comment on this post or email me (tref at timico.co.uk) and I will happily call them back.  Thanks in advance.

Oracle has been in the news recently with the acquisition of Sun. One of the prizes that comes with this purchase is Open Office. This probably would have fitted in very well with Oracle’s Network Computer play of ten or more years ago – I remember visiting Oracle at the time to try and design in some networking components.

Lack of cheap high speed connectivity is what brought Oracle’s efforts to a halt in the 1990s. Today the environment is completely different. Today, however, I don’t see Oracle playing in the space. Instead the spotlight is on Google and what can be seen under the bright lights, understandably, bears no resemblance to what was there in Oracle’s day.

All the components are there: cheap connectivity which is getting faster and cheaper all the time, a massive cloud computing infrastructure that would have been unimaginable ten years ago and a whole bundle of applications that are easy to use and can be accessed from multiple platforms.

Google is poised to be a massive player in the Unified Communications market, at least in the consumer space and downstream probably for small business as well.

There are already many reasons why people use Google’s online facilities. Google mail, Google Calendar, Google Maps, Google Docs and Google Talk and of course Google the search engine.

When I log onto my iGoogle home page I can already access many features that would traditionally have been the domain of a business based Unified Communications service. From my Google Mail account I can send Instant Messages and have video conversations. I realise there are other services available where this can be done but none have the same potential for integration with other cloud based applications (Microsoft will probably disagree with me here).

Now add mobility. Despite being a clunky initial design, sales of the G1 phone have just hit the 1 million units mark and are forecast by British based analyst Informa Telecoms and Media to overtake the iPhone by 2012. And it is still early days for Android, the open sourced mobile operating system used by Google.

HTC has announced a new Android based smartphone that will support Google Mail, Google Talk, GoogleMaps, and synchronises with Google calendar and contact list. Word also has it that Samsung is also looking to introduce three models later this year. The initial clunkiness will soon be long forgotten.

All this points to more and more users using Google Unified Communications services. This doesn’t mean to say I am tolling the death knell of other UC services. I am not. Business has needs that go beyond what Google offers as a basic service.

Better office tools aka Microsoft Office, integration with other business services such as Customer Relationship Management tools operation behind secure company firewalls etc etc. These services are however becoming increasingly virtualized and hosted in the cloud, just like Google does and like Oracle wanted to do way back when I fitted into a smaller waist trousers.

As far as Unified Communications goes I can see clearly now and the future is in the cloud.