I attended the DEAct workshop at the House of Commons on Tuesday afternoon.  Held in the Jubilee room off the Great  Hall of Westminster, this put together once more rights holders and everyone else in a session that had been organised by Eric Joyce MP in order to be able to put together a summary of the two positions for MPs to take away with them over the holidays.

There is an immediately an observation here in saying “rights holders and everyone else”. It is more than just the ISP community that is objecting to the Digital Economy Act. Consumer and human rights groups are also also in opposition to the Act.

In a sense this meeting was just a rehash of all that has been said before. It was held, however, because with the ongoing Judicial Review and the Parliamentary inquiry (that should have been held before the Act was passed) do present real opportunities to make changes.

The two positions can be summarised quite easily:

Those opposed to the Act say:

There are many other issues such as who pays and the practicalities of disconnection and website filtering as technical measures but in a sense these are almost side plays to the fairness and human rights aspects.

The reality here is that someone is going to be hurt whatever happens and the judgement that must be made relates to the fairness of who gets hurt.  Is it fair to open up Mrs Abercrombie next door to the possibilites of fundamental injustices versus is it fair to let the rights holders industries suffer and decline.

The fact is that Mrs Abercrombie will get hurt. There is also a very real scenario where the country will go to all the efforts prescribed by the Digital Economy Act and also incur the huge costs with a result that will have zero impact on levels of online copyright infringement. This Act is all about stick and no carrot.

What is certainly clear is that with the evolution of the internet and the world wibe web the world society is going through a huge change. Much of this is for the better but as in all situations of change it is not to everyone’s liking.  When Hargreaves invented the Spinning Jenny it put many home weavers out of business but did not kill off the weaving industry. It just changed it. Like my analogy or not this is where the creative industries are at now. The biggest problem for them I fear is that it is not obvious how their business model is going to evolve.

In carrying out their inquiry into the DEAct the government should not only recognise this but also that sticks don’t work and they should concentrate more on the carrots.

PS as a postscript I am given to believe that the issue of public intermediaries (ie libraries, universities etc) caught under the act is going to be treated sympathetically. It would be very bad press for this not to be the case at a time of cost cutting. It unfortunately potentially also open up big holes in the effectiveness of the Act. We can only wait and see here.

Check this video short out.

I don’t know about the rest of you but by the time Christmas Day comes along I’m going to be partied out. It all started with the ITSPA Awards at the House of Commons on Thursday last week followed by lunch with customer Foxtons on the Friday.

Monday I had dinner with KeConnect MD Robert Kemp in Ipswich, lunch with NTL on Tuesday at Cafe Bleu in Newark. Last night it was the Timico management bash at the Olive Branch in Clipsham. Tomorrow night it is the Twang.net party at Monty’s in Newbury.

Then Monday it is the Timico staff party at Belton Woods near Grantham. Tuesday night it’s The Wig And Mitre in Lincoln. I’m assuming that Santa has already sorted out what presents to bring the kids because I certainly haven’t had time to do it.

I have to say that I am looking forward to the period of austerity that this time of credit crunch and financial uncertainty merits and will be joining the queue for discounted lettuce at the reduced section in Tesco’s on the 2nd January.

I mentioned that I would get some photos up once they came back from the developers and here they are. The biggest shock for me is to see how much weight I have put on this year – something to sort out in January!! I also note that I need a haircut.

On the plus side having reflected of the Awards Evening it was a highly successful event from ITSPA’s perspective. Not only was the turnout high but in his speech Ofcom Board Member, Stuart McIntosh, was most complimentary regarding the work that ITSPA has been doing. This is ITSPA growing up.

This is a time of fast moving changes in the industry and it is good to be a part of it. 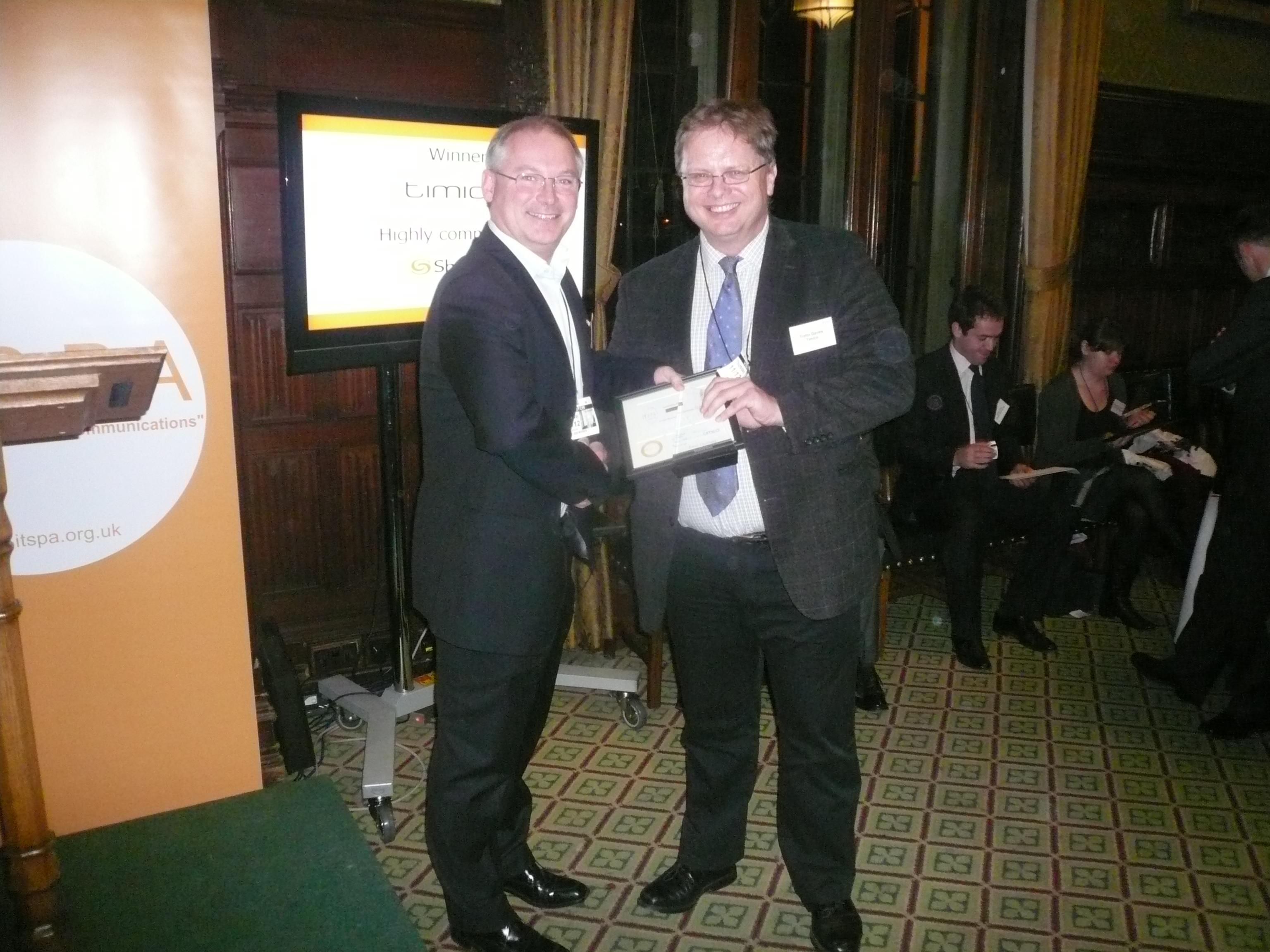 I accept the ITSPA Unified Award from Dave Axam of BT. 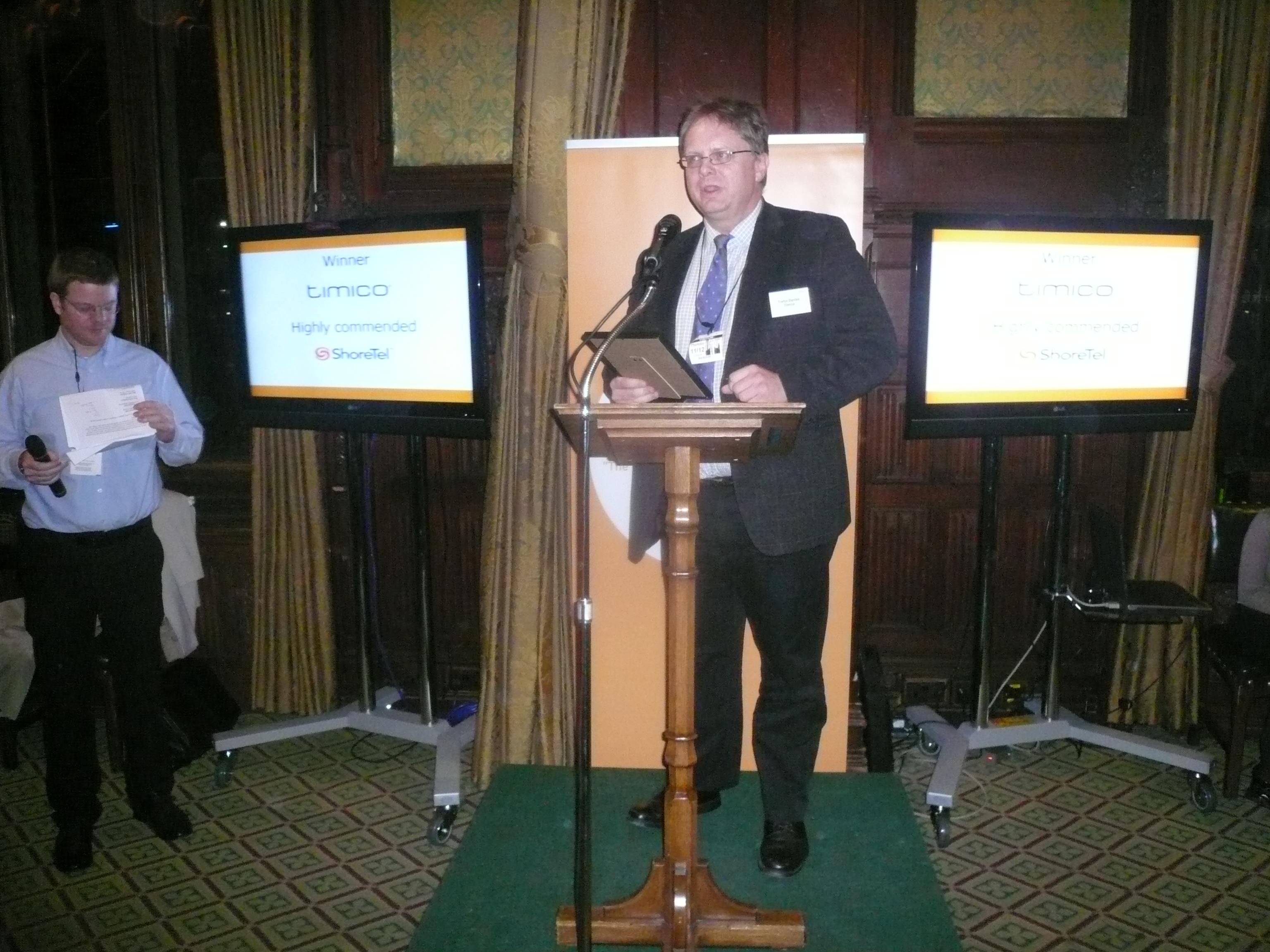 The acceptance speech; erudite, informed, witty yet tempered with the appropriate level of gratitude and humility.

I’m thrilled to report that Timico won the Best Unified ITSP at the ITSPA Awards at the House of Commons last night. This was for an ITSP who is also an ISP. It’s an exciting finish to what has been a very exciting year for us and is the icing on the cake after the 4th place in the Sunday Times Techtrack.

The event was jointly hosted by MPs Ian Taylor and Derek Wyatt, Chair of the All Party Communications Group and took place in the salubrious surroundings of the Members Dining Room at the House of Commons.

Other winners were BT for the consumer award, Gradwell.com for the business ITSP, AQL for innovation, and Cisco for best hardware.

The Cisco win is also significant because Timico Group company KeConnect is Cisco’s partner of choice for SIP trunks and this provides a nice filip for the partnership going into the new year.

Finally the VoIP personality award was won by Eli Katz for his tireless service to the industry since founding ITSPA four years ago. This came as a total surprise to him as we had decided at the Council meeting not to have this category 🙂

Once I get hold of some photos I’ll do another post – I know how you are all dying to see them.