Twitter has been in the news a lot recently.  It’s been around for 3 years and I started using it a year ago to experiment and to understand what it was all about.

One year ago it wasn’t really clear where it was all going but I could feel that there would be some uses.  In the meantime celebrities have latched onto it and it has been a way of following news as it happened.  Also my experience with “attending” the SocComm conference via twitter was an education.

I began to get followers who I had never heard of and when looking at their own profiles they had many thousands of followers and were in turn following thousands.  It looked then as if people follow people who follow them.

I began an experiment by randomly following others who were either following or being followed by people that were following me, if you follow my drift.  I got these results: 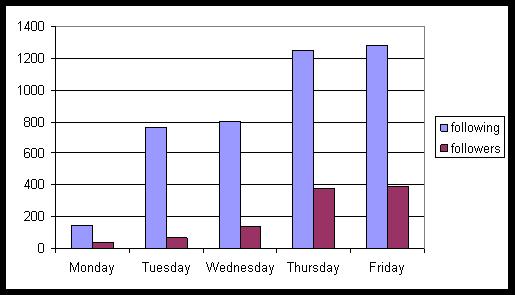 There is obviously an increase in followers in line with those being followed.  This not massively scientific but interesting nonetheless. There is a scenario whereby if I spend enough time at it 25% of everyone on twitter would be following me.  Of course I’m not going to waste my time doing it and I’m sure the dynamics change with volume.

Something that has come out of this excercise is a slight increase in visits to trefor.net due to traffic from twitter.  So if I was focussed on nothing but growth in my readership, which I’m not because I also have a day job,  amassing huge numbers of twitter followers would probably be a good  thing to do.

Also it gets to the point where there is so much twitter traffic it gets difficult to see the wood from the trees.  It then becomes a kind of ticker tape where you randomly glance ast tweets.  Twitter has I’m sure got a lot of evolving to do.