Managed VoIP is defined as PSTN replacement over managed IP networks and does not seem to include hosted Unified Communications services such as offered by the likes of Timico, pure play VoIP providers or P2P services such as Skype.

Click on the chart a couple of times to enlarge – the font is very small. 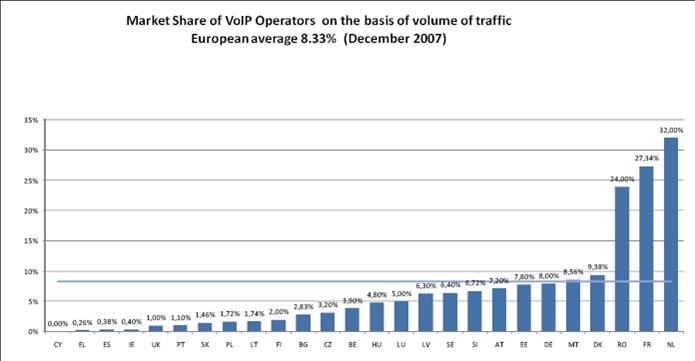 One might conclude from this that VoIP is healthy in some countries but not in others and the UK performance in particular being woeful. In fact what the above chart tells me is that VoIP usage has certainly boomed in the aforementioned countries but also that the methodology for measuring in the UK at least is inadequate.

The EU data is for December 2007. Ofcom, with who I have a meeting on this subject next Thursday, is presumably the source of the UK numbers and they are missing a trick here.

The UK numbers, as far as I can see, are based on a survey that asked consumers whether they used VoIP or not. Many people will be unaware as to the fact that their telephone service is actually VoIP. BT Homehub for example is VoIP but not sold as such and this service is known to carry billions of minutes a month, although BT has not published specifics.

So good news in some countries which presumably will have got even better since the Dec07 datapoint and some work to be done in others. I will report back after my Ofcom meeting next week.