I have been raving about the Kodak zi8 but now enter the GoPro HD HERO stage left. This is a headcam that Ben, our head of NetOps, has bought this month to go snowboarding. Instead of holiday snaps he wants memories in 1080p HD on YouTube that all his mates can watch when he gets back. Black runs, off piste (on piste) etc etc etc.

This short 60 second video is a paltry 44MBytes. It’s a bandwidth bandit though because who knows how many fans will be clicking to watch his runs. If he has a spectacular crash it could run into millions of views.

The video itself is just a quick run around the engineering floor at Timico’s HQ in Newark. The photo below shows it being modelled by Ian P Christian (Pookey). Good looking boy! I had to take the sound out because of comments made on his tour…

Photos of Pookey below wearing the headcam – from a couple of angles (taken using a Nokia N97 if anyone is interested 🙂  Looks like a great piece of kit – if the vendor would like to send me one for further evaluation that would be great!

Interestingly a 32Gig SD card will hold 4 hours 21 minutes of 1080p HD video!  I don’t know how long the battery would last.  It won’t last long enough on my Kodak to be able to fill the memory  but if I was making a long movie using the zi8 I could plug it in to a power outlet. 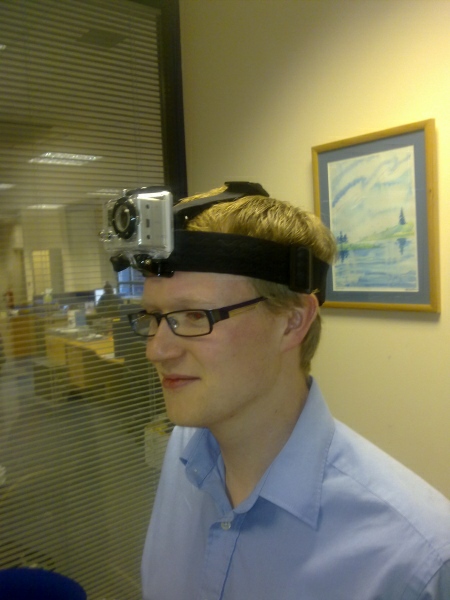 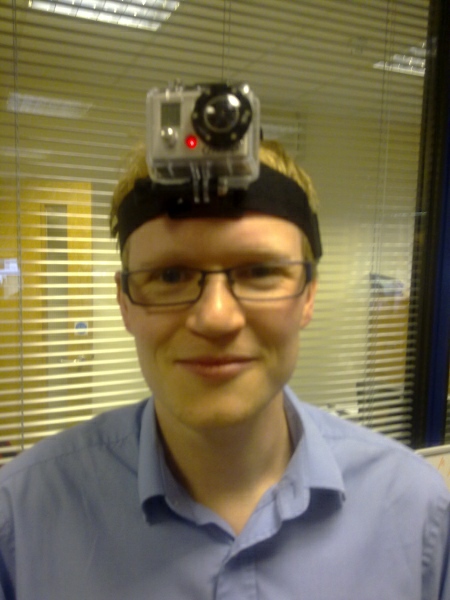 no point in rural people buying these then… won’t be able to upload them on dial up.

You can imagine the potential applications for this. HD video together with image recognition and an earpiece = a reminder of the name of the person you are looking at as they approach you :-).