No surface is too tough for superspade. Grass and soil it doesn’t even notice. This baby likes to flex its muscles by digging up tarmac. In fact it is so soft on your hands that labourers using it are often mistaken for office workers (until they ask for four sugars in their tea and give the game away).

Most people have a whinge about BT somewhere in their portfolio of anecdotes. Last week I found myself in the slightly 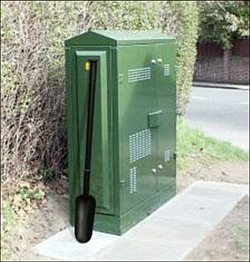 BT Group has announced a series of innovations that on the face of it are largely aimed at reducing the cost of digging in fibre. These include:

I can almost hear the deep intakes of breath and the look of amazement on your faces as you read this. I’m not sure whether your incredulity is down to not believing that BT could innovate in this space or whether you think that these developments are not particularly significant.

Well actually whilst each of these innovations may seem trivial what they collectively do is send out a signal that BT is trying to do something about the aspect of it’s business that is often criticised as being one of the barriers to cost effective fibre broadband rollout (FTTC & FTTP) and that is the cost of digging trenches.

When the Caio Report came out in 2009 it quoted a figure of £29Bn as the cost of rolling out fibre to every home in the UK. Of this something like £24Bn was supposedly the civil engineering cost.

I have no idea how the announcements herein will affect the overall costs for BT. Only time will tell. For now at least the messaging is right.

Did you say ‘a mini DSLAM to provide cost effective coverage for low density areas’.

Wait for the comments…

The words are lifted straight out of the BT Quarterly report presentation http://www.btplc.com/Sharesandperformance/Quarterlyresults/PDFdownloads/q211_slides.pdf

I offer no specific judgement on any of its content 🙂

When the BT FTTC cabinet was recently installed near my home, I couldn’t say I was surprised by the cumbersome process, given what I’ve seen from BT in the past – one crew building the plinth and installing the cabinet, another crew connecting the cabinet to the local UG chamber, the electricity crew coming to connect the power, and then a further crew coming to install and commission the equipment. Streamlining this process has to be a good thing.

For instance: I'm so close that I'm actually in the TDR "dead zone" for a line test – "Line length zero metres".

Unless I'm missing something, other than standardisation, why go to the expense of civils work in this sort of situation, where the equipment could actually be housed inside the exchange, avoiding civils costs?

Mike
Something at the back of my mind tells me it relates to not having this specific fttc kit in exchanges due to environmental issues but I could be way off the mark.
Tref

There is something about standards that prevents the kit being in the exchange.

Glad to hear something good about them! Makes a change. This company has been inefficient for a very long time.

I’ve had an unofficial answer though not sure it is right but will stick it up anyway:

Thanks for asking around anyway… I suspect it’s got more to do with a biscuit-cutter architecture that’s near enough identical, wherever you go. Though it looks like even that is set to change slightly, with the new power supply, new plinth design, and the mini-dslam.

In my case, I don’t think the copper path between customer and exchange gets much shorter, given I can see the exchange out of my window. 🙂

Tref, I’m not sure that’s right either. For short lines, VDSL should deliver a speed boost compared to ADSL(2+) even when the line length stays the same. Not sure of the exact numbers, because it depends on the frequencies in use, but the diagram I just looked up showed that VDSL2 with max speed 250Mbps (not the same flavour of VDSL as BT) was better than ADSL right out to 1 mile. With a lesser version of VDSL, the improvement probably isn’t going to reach so far, but I expect it would still be an improvement for homes within spitting distance of the exchange. I think the Access Network Frequency Plan ( interference issues) is to blame for there being no VDSL in exchanges. I wonder if there are any plans to change this?

I’m intrigued by that spade. It looks like something you’d use to dish up a very large stew.

“When the Caio Report came out in 2009 it quoted a figure of £29Bn as the cost of rolling out fibre to every home in the UK. Of this something like £24Bn was supposedly the civil engineering cost.”

I wonder what it is now….

We should ask him

And how long will it be until someone cuts into a mains cable with his super spade? It’s just as bad as the good old pick axe and that’s been banned. You have to remember BT has to work to the road and street works regulations. They cannot just dig without prints of all the other underground users i.e. mains/gas. This is one reason it is safer to use sub-contractors who have the expertise and specific safety equipment to do this. Placing the duct just under the tarmac is not an option it will need to be at a reasonable depth .
As for conductive concrete onto a plastic cabinet base, the mind boggles. I am sure the incumbant goverment would love to get rid of safety and all it associated costs.

The NICC’s standard ANFP dictates that the frequencies used by VDSL2 cannot be used within the exchange building, and can only be used from cabinets.

Hence exchange-only lines are restricted to ADSL2+ from the exchange building, while those lines served by a cabinet just outside can get a full FTTC service.

So far, BT seem to have ignored these subscribers (who are likely to have fast, stable ADSL services anyway). It’ll be interesting to find out what their long-term plans are to get this group into the “superfast” game.