Reality is that other than the Simpsons the kids only watch TV when one of their parents decides they are sick of the Xbox. When I say TV I mean the physical TV traditionally known as the “box” (flat panel?!) as opposed to iPlayer, 4OD et al.

The 2011 Ofcom Communications Market Report has some interesting insights here expressed particularly in terms of the generation gap. 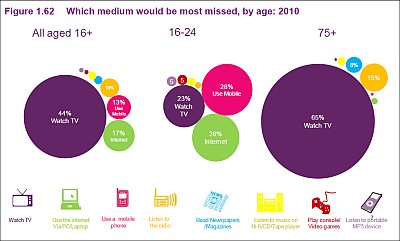 When asked “which medium would be most missed” the youngest age group surveyed (16 – 24) had TV only in third place behind the internet and their mobile phone. Our kids are younger than this and would probably rank TV watching even lower with Playing Console Games coming in as more important.

Some of this is undoubtedly down to the fact that an 11 year old (say) is going to be more interested in playing games than listening to music and won’t have the cash to indulge in the use mobiles to any real extent. I’d rank our 11 year old’s  priorities as Xbox, internet, music and then TV. He does much of his “networking” using Facebook and chatting to his mates using VoIP whilst playing Football Manager, FIFA or blasting the living daylight out of zombies (OK I know that last one doesn’t quite workJ ). Note that when I say Xbox here this almost always involves the use of the internet.

This isn’t to say the kids won’t be watching TV but they will naturally do it using the internet as a bearer. By the time my 11 year old moves in to  the bottom of Ofcom’s 16-26 demographic I’d like to bet that TV will have slipped further down the rankings. It’s a good job we have FTTC coming our way.

I think I’ll watch a John Wayne western this Sunday, just for old times’ sake. There will be one somewhere on the internet 🙂

2 replies on “The Demographics of Communications”

Dad likes his movies on tv, but mainly uses iplayer to watch stuff at the times he wants to watch and not when its broadcast. Husband likes the BBC news in kitchen at breakfast time. Tv in our lounge is never switched on any more. Grandchildren sometimes bring a dvd to watch.
I think things will change when we get youview, and tv on demand takes off, and especially interactive tv.
Of course this is only going to be possible on decent connections, so it will only apply in towns and cities. The rural areas will stay analogue. I think the stats will one day show this, and folk will then accept the growing digital divide.

What about when the rural exchanges get ADSL2+?