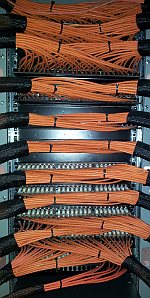 Newark. This is most easily done in pictorial fashion.

It’s nearly done. We are moving kit in. No desks yet but there is now a steady stream of engineers popping over, doing stuff. 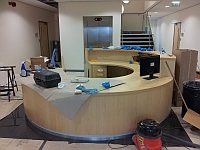 We have a reception desk. More like Tardis console without the bit in the middle going up and down. Obviously the reception area is still work in progress but first impressions are important and it aint looking bad.

Some of these photos have been chosen exclusively for their artistic qualities. The patch panel below for example is worthy of the Tate Modern though quality of the photography probably leaves a little to be desired – I’m not a trained photographer you know.

The photo of the cold aisle is a development on the last one I did which didn’t have the enclosures and attracted comments about inefficiency. This one shows the door at one end and you can just about make out the fact that the aisle has a roof on it.

Two more pics to go. This first one is a bit of the coffee machine in the 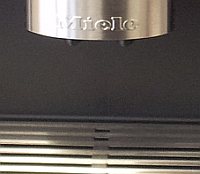 first floor kitchen. It reminds me of the Graham Green novel “Our Man in Havana” who was supposed to be sending back photos of secret Cuban missile parts (or simlar) but which in reality were components of a vacuum cleaner. If you look at it from the right angle it could be a missile part (or a vacuum cleaner) 🙂 .

I will say the NOC engineers are going to have to look out for caffeine overdoses because this dispenses the real mcoy in volumes and free of charge. There is also a tap for boiling water – no more frustrating queues 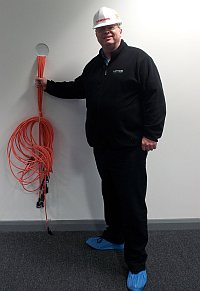 in the kitchen waiting for the kettle.

And finally a picture of me holding a bunch of cables. I’m not going to give you any clues about the cables because are goingto be plugged into something uber impressive and you will have to wait for that. 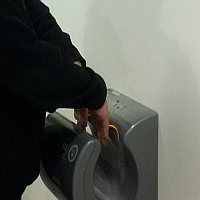 There you go – a data centre update 🙂

5 replies on “Where there is technology there is art”

All looks very smart!
You are certainly moving fast.

I’m sorry but you’re just trying to get me to give the game away – I am not going to say what it is yet. It will spoil the surprise (I sound a bit like my mum in the run up to Christmas).

Cabling on the right looks neat

[…] it is, the one you have all been waiting for. After a lengthier than usual  shoot and an intensive post-shoot production period (correct me […]