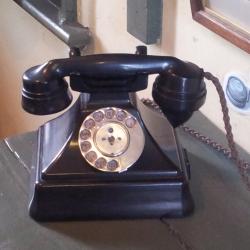 after school – cricket in summer and rugby in winter. Afterwards I’d walk down Bray Hill to the phone box at the bottom and call home for a lift. I didn’t need cash. When the pips went Mam would know it was me and she would set off to Douglas to pick me up.

Mobile phones had not been invented. I really don’t know how we managed but somehow we got by. At university there was one phone to serve the whole hall of residence – 350 or so students. I must have called home every now and again but probably no more often than once a week. I recall I used to write letters. I had terrible handwriting in those days which has 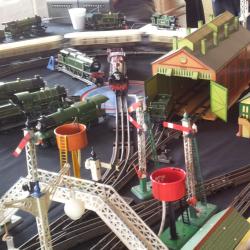 since deteriorated – I only ever type these days.

This morning we went to the Museum of Lincolnshire Life on Burton Road in Lincoln. There was an exhibition of old Meccano toys. I used to have a Meccano kit. Today’s layout had a train set from the 1930s. A bit before my time.

A time of innocence.

Its still the same where I live. The farm kids still use the phone box in the village cos the mobiles don’t work where they live. The kids who go to uni still have to write home unless their parents can afford a satellite.
Maybe we should redesignate our rural areas as museums? So much for ‘digital britain’. 😉

Some parents can afford a satellite – wow! Do they go to the launch?

Can’t they phone home from uni?