En route to Earls Court yesterday for the Infosec show 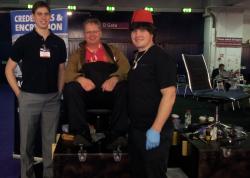 I had a bit of time on my hands whilst waiting for a work colleague’s train to turn up so I took the header photo with my Samsung Galaxy S2. It’s interesting to see how people naturally spaced themselves out so that there was an equal gap between them and the people in different directions  around them.

I’m going to write two posts on the visit to Infosec. This one covers all the essential things you need to know. The second will take a little more serious look at some of the learnings 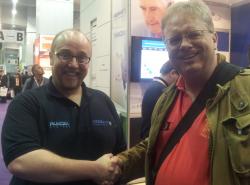 and add some thoughts.

The essential information is presented here in pictorial format. The first inset photo is the shoeshine stand at the Echoworx booth. I say booth but all it really was was a space with a popup and two shoeshine chairs, one of which I sat at – I like to look after my shoes me (Timberland – none of this Hush Puppy stuff). The downside is that for 5 minutes as a captive audience I had to sit through a sales pitch for Echoworx. It’s fair enough. I got my shoes done and they got their message across. Bloomin’ hard work for the sales guy though – twelve 5 minute elevator pitches every hour. Wow.

The shoeshine guy was really interesting. Turns out he is a Seamus McDonagh, former cruiserweight boxer who was once a contender and was matched with Evander Holyfield – he showed me a photo of their fight. He now lives in San Fransisco and presumably works as a  shoeshine although his  Wikipedia profile suggests he is an actor (probably in between jobs).

The next photo is of me with Dennis Webster of Pangea Systems. He is in this post not only because is he a really nice guy but also a Timico Customer – it’s one of our screening criteria before we take on a customer 🙂

The rest of the photos are me with random people at the show.  Click on each one to enlarge. 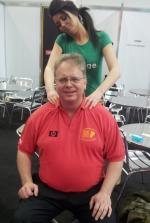 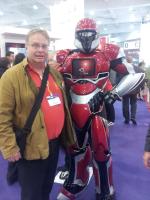 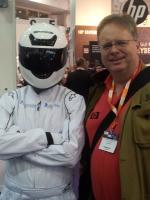 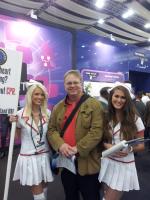 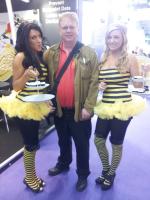