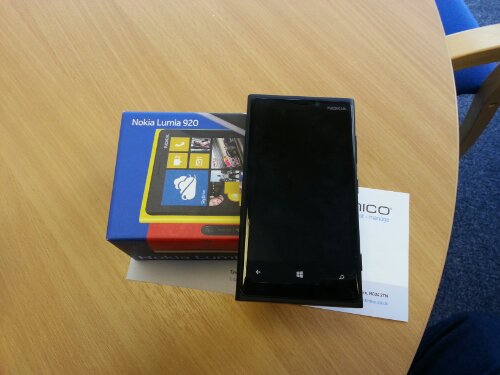 I’m having a Windows8 day. This means I’ve backed up my laptop and flattened it to install Windows8 Professional.

I tried installing Windows8 & keeping my files last week. After a whole afternoon in which Windows8 “checked my programs for compatibility”, advised me which ones wouldn’t work or were not supported and then went through a whole rigmarole including several restarts only to find at going home time that the install had failed and the PC was restoring Windows7.

I parked it until today and have gone for the complete reinstall. All in all this took a couple of hours including creating a new Microsoft account. I used to have [email protected] but I haven’t used it for years, lost the password and I think at some stage Microsoft might have locked it. Anyway I now have a new one – surprisingly enough [email protected] was already taken:)

In tandem with all this I started up my new Nokia Lumia 920, fully charged last night and ready to rock and roll. Except it isn’t.  An hour into the setup it stopped working. Dead. No life at all. This isn’t a phone you can take the battery out of and put it back in to see what happens. The battery is not removable. Putting in the charger had no effect. It is an ex phone.

The Nokia Lumia 920 has been sent back whence it came. Not a good start. I have another charging up. This is a shame because I have a feeling that, availability of apps aside, the combination of Windows8 desktop and mobile is going to be good.

There are two other issues to consider. Windows8 is very different to everything I have seen before. It’s going to take a while to learn its foibles. The first feel though is that one the intricacies have been sorted it will be fine but this will be a subject for another post in a week or two.

The other issue is disk space. I backed up my Windows7 laptop to a 2Terabyte hard drive. I had around 60Gigs free on the laptop at the time. Restoring the data from the backup is a problem. I have run out of disk space before the job has been finished. I can’t imagine that Windows 8 is 60GB bigger than Windows 7 so something needs sorting out. At the time of writing I haven’t had time to do this.

I took some photos of the Lumia before sending it back. I’ll need to get them off the phone via Google+ for the moment. That brings me to another point. With this Windows8 setup I want to be an all Microsoft user. This means not using Chrome. I’m not sure whether that will work for me but we shall see. I’ll have to switch to SkyDrive for backups and whatever other “apps” that Microsoft brings to the party. I think it’s going to be a tough week or two getting settled with Windows8.

When I announced this morning on twitter that today was Windows8 day all I got was sympathy. I have to say that so far the sympathy has been justified but I am going to persevere. The biggest issue for Microsoft is whether the general public will persevere. I guess if all new PCs are shipped with Windows8 then eventually people will have no choice but to run with it. I don’t think it is going to go down too well in the corporate world if my own experience is anything to go by.

One reply on “Nokia Lumia920 dead on arrival #Windows8 day”

footnote – having run out of diskspace a couple of times I did some digging and found that far from flattening the old disk all my documents had been kept so I was double bubbling.

All is now better.