Hard to believe but exactly five years ago today I posted my first blog piece on trefor.net. It coincides very closely with my fifth anniversary on Twitter. Since then I’ve written 1,616 posts – also hard to believe. 30,517 tweets in that time. I’m not going to dwell on the interim five years. The world has changed.

Even though it is the sabbath I’m going to celebrate with a nice Twitter story: 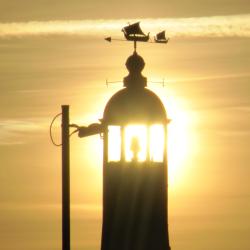 This weekend I’m staying with me dear old mam and dad in the Isle of Man. On Saturday morning I wandered down into a drizzling Peel and made for The Harbour Lights Café. It’s one of my faves. A classic seaside café with a quality product and a very relaxing atmosphere. It’s the sort of place to go when it’s raining out and there isn’t that much else to do. You can almost picture the scene: the occasional umbrella walks past the window, the raindrops saunter down the glass, every now and then a car whooshes by, a pot of tea and a plate of crumpets arrive at your table.

On this occasion the Harbour Lights was closed. You can’t imagine my disappointment. A real wave of emotion came over me. I looked in through the windows and walked around the outside of the building. It took me a while to realise that I was early. It opened at 10am. The time was exactly 10am and it being, as you know, one of my fave caffs I was quite prepared to give it some leeway, forgiveness. As I crossed the road to the promenade a car pulled up and a girl got out and proceeded to unlock the front door.

I walked off and crossed to Fenella Beach and the breakwater. Not many people around. It was classic Manx weather. The day before had been beautifully sunny. Today we were back to mists and white topped seas. I was comfortable with this. At the beach there were some kids kitted out in safety gear clambering over the rocks with an instructor type. I wandered on to the breakwater and climbed the steps to look out over the water.

On other occasions I’ve been able to spot a basking shark from that position. Not today. Even the basking sharks were staying away. A couple of bikers, helmets in hand, walked around the castle and a bloke in an old Rover sat there smoking with the engine on. Turn it off man!

A fisherman was lowering scallop dredging kit onto his boat. I stopped for a chat. There are only two weeks left of the season. It starts again on November 1st. When you think about it the sea floor needs time to recover and for the creatures to bring on the next generation. A good haul is twenty bags on a trip but at this time of year you are lucky to come in with ten.

The rain spotted the lenses of my specs and I figured it was time to move on and back to the Harbour Lights. I got there at the same time as a young couple and sat at a table looking out onto the promenade. Tea and crumpets ordered I settled in to Twitter availing myself of the caff’s free WiFi.

At this point I’ll let my tweets tell the story:

@tref: Live tweeting from @harbour_lights cafe on the prom in Peel using their free wifi. Crumpets & tea for brunch

@tref: @harbour_lights is one of my fave caffs.nice sitting here in the window watching the rain run down the glass

@tref: Just seen the size of @harbour_lights special breakfast-huge. (I should be on commission here) 🙂

That one was retweeted by @harbour_lights which was nice –  I felt that the café was reaching out and engaging with me its customer. The young couple who had arrived at the same time as me were tucking into huge plate of “full Manx” – the Harbour Lights special.

@tref: There is no rush

@tref: This reminds me of my student days – sitting around all day drinking tea

At this point the waitress came and asked me if everything was ok and did I want some more hot water in my tea pot. I declined and said she could bring the bill whenever she was ready. A short while later she came back and said that the bill had been taken care of. The boss had rung up and said it was all on the house having seen my tweets.

@tref: Thanks @harbour_lights for brightening up a dank day & thanks for the tea and crumpets  )

I left the café with a smile on may face. That was a great experience.  My suggestion of commission was a bit of fun – tongue in cheek. @harbour_lights is a good business. They understand how to build customer satisfaction and loyalty.

The smile stayed on my face all the way home through the rain.

It’s amazing the effect that a smile has you know. I passed one woman who smiled back at me. As I got towards the White House pub there was a bloke stood outside in his work gear having a cigarette. He smiled back at me. Not normally the sort of thing a grown bloke does to another bloke he doesn’t know.

In a nutshell that is how the world has changed since I started to write this blog.

Hi Tref, Great story and congrats on 5 years of blogging!

I think we are probably overdue a catch up so a beer is on me next time you are in London! 🙂

fantastic post! I could imagine I was there with you.

Sounds great, if I ever pop over to the IoM I’ll surely pop in there.