Broadband speed bits or bytes – ISP PRs gets it wrong

It happened in this blog post ostensibly written by TalkTalk CTO  Clive Dorsman.
Now it’s BTs turn. On page 8 of today’s Times their half page advert tells us that with Infinity for business you will be downloading a big 200Mb file in less than half a minute. That’s because Infinity is “as much as 6 times faster” than the UK average broadband speed which the BBC told us in March of this year is 12Mbps. So a 72Mbps broadand service can download a 200Mb file in under half a minute. By my calcs it should take less than 3 seconds, ok a bit more if you chuck in some packet overhead.

If I were BT I’d get a new advertising agency. This one’s rubbish. Even if you accept that very few people get the max advertised “up to” speed of “Infinity” broadband it would not be unreasonable to say “(up to) less than 5 seconds”.

Photo is of the BT ad. Serendipity eh. I only read a hard copy paper about once a year. I’m only doing so today cos I’m en route to Laandan on a rare trip without my laptop. ISPA council, AGM & awards. Wish us luck:)

Update 6/7/2014 This subject is getting almost boring as I periodically meet people who get their broadband speed bits or bytes mixed up. When I point out the error of their ways they shrug it off. However to us purists it does matter 🙂 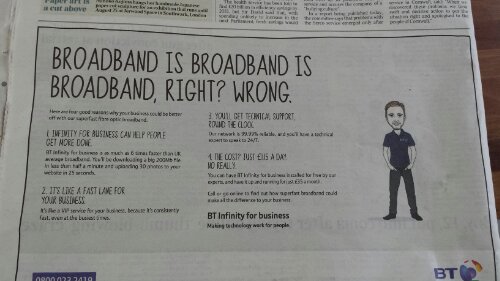 This blog post comes to you courtesy of the Samsung Galaxy S4 and the excellent WordPress for Android app.

Sure its not an ISPA council meeting you are going to 🙂

“Even if you accept that very few people get the max advertised “up to” speed of “Infinity” broadband” – has to be at least 10%, ASA rules apply.