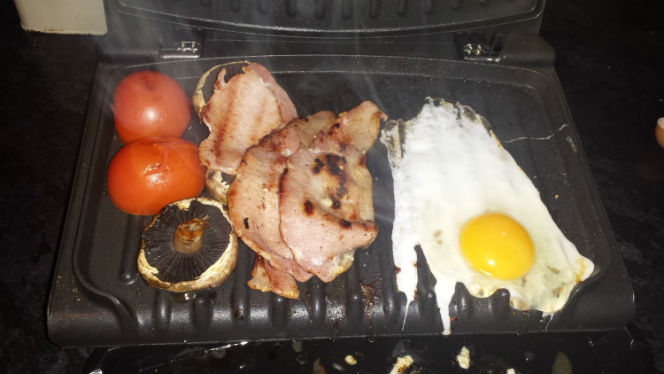 This week we procured a George Foreman grill – family sized and henceforth referred to as the GFG. £20 from Lidl but I’m sure it is also available from other good supermarket and electrical retailers. This follows on from a similar acquisition by our daughter heading back to university for the new term. Hers wasn’t family sized but that is not material to this discussion.

You need to know that the GF is perfect for cooking breakfast on a Sunday morning. Due to the non uniform -sized nature of the raw materials involved (ie the ingredients) there are however some modifications to the normal cooking instructions that you will need to make.

Mushrooms and tomatoes are thicker than bacon and egg so you can’t have the lid down. The recommended cooking times provided by the GFG, with suitable disclaimers regarding food actually being properly cooked – it is an American product, are really only valid if you have the lid down and are thus cooking on both sides simultaneously (that’s at the same time yawl). It’s not as efficient this way but sometimes concessions have to be made for the sake of the art.

An element of judgement therefore has to be applied when cooking breakfast in this way with the GFG.

You should begin by preparing all the ingredients in advance and have them ready next to the GFG on the kitchen worktop. Any form of worktop is ok. It doesn’t have to be granite. Mushrooms should have their stalks remove which is a bit of a waste but necessary for this recipe. Switch on the GFG several minutes before you need to start using it. This is a guess but one imagines that one needs to wait a while for the cooking surface to reach its optimum temperature.

When the grill is hot enough place the mushrooms face down and the tomatoes with the round sides down on the left hand side leaving a suitable space for the bacon and egg that is to follow. If you are cooking sausages you should also put them on at this stage. No further mentions of sausages will be made in this post. Just make sure they are cooked before eating them.

After a couple of minutes turn the mushrooms and tomatoes and place your bacon on the GFG. I like to press bits of the bacon down, especially the fat so that it cooks nice and crisply but that is a personal preference. You do it the way you like it, love.

This is the point where the GFG really comes into its own. Using a wooden fish slice, palletty thing, you can scrape off the yucky white preservative rubbish that most bacon seems to come with these days. Even the “good” dry cured stuff. The crap all runs into the handy drip tray that you will have placed under the front of the GFG – I should have mentioned that earlier in the post when telling you to switch on the appliance. Oops.

Every now and again you can lift the edge of a bit of bacon with your wooden utensil to see if it is cooked underneath. When cooked carefully turn the bacon and begin cooking the flipside – not a culinary term but one  I thought might be universally understood (yawl).

When the bacon is cooked stick some toast in the toaster and press the lever down to start toasting. You can leave this bit out if you aren’t planning on having toast but I was. M&S half and half on this occasion but Waitrose Paisan Blanc is best. We didn’t have any WPB in. 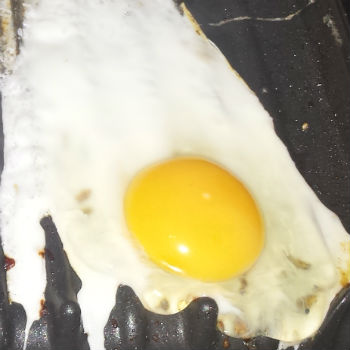 Prop the bacon up against the sides of the tomatoes fat side down so that it continues to crisp up and carefully crack an egg onto the griddle where the bacon used to be. At this time the chances are the egg will try and slide off the bottom of the grill so you will need to find that wooden pallet thing and hold it over the end to stop it. I did this quite successfully.

You can tuck bits of the egg in occasionally to keep it tidy but be careful not to break the yolk. Mine did break during a bit of tucking but it had almost finished cooking so no great harm was done.

The egg should finish cooking at the same time the toast pops up. This is the signal to retrieve the plate being warmed on the cooker hotplate and transfer the ingredients (to it).

There you go. From here on you can use your normal breakfast preparation procedure. I like to add brown sauce and have a glass of milk/orange juice/cup of tea/all three but the recipe is entirely flexible. Stick Classic FM on the set, if it wasn’t already on and tuck in.

PS for American readers the pinky brown stuff next to the egg is called bacon.

PPPS Note I didn’t “flip” my egg due to the associated risks on the ribbed griddle.

5 replies on “Important announcement on a Sunday morning”

Would one of those metal rings keep the egg from flowing down the slope ?

Nah – they would have to have corrugated sides to slot into the ribs on the GFG. Could be a saleable accessory mind you if old George put some dev effort into it

I believe the correct spelling is “y’all” rather than “yawl”.

Not that I believe it’s a correct use age of English in either case. Incidentally, as an Australian I feel I’m in the proverbial glass house here.

And now the iPad has corrected usage to use age, thereby destroying all of my credibility. Curse my sausage fingers.