Kid 2 introduced me to Snapchat. Must have been two summers ago when she was about to set off for uni. Other than very occasionally looking at her chats I ignored it.

Recently I saw an article somewhere, BBC maybe, that said the yoof were moving away from Facebook to Snapchat. One of the side benefits, if not the prime motive, was that the media wasn’t stored. More private.

Now my wife uses Snapchat to talk to Kid 4. From her iPhone. Believe you me this is massive progress. Anne doesn’t do Facebook. But she does do Snapchat, now. She also sends texts and occasionally calls people.

I used to think the whole short video/pic thing wasn’t going to take off. I’ve changed my mind.

I also wonder whether the fact that no data is kept (or so we are told) is the way ahead – short termism in extremis. Makes sense considering the way our society is evolving elsewhere. The throwaway society taken to its ultimate conclusion.

Now I think about it how often do I look at any of the photos and videos I store – there are hundreds of Gigabytes of them.  Not very often. I’m not going to get rid of them though. It’s a mind set. 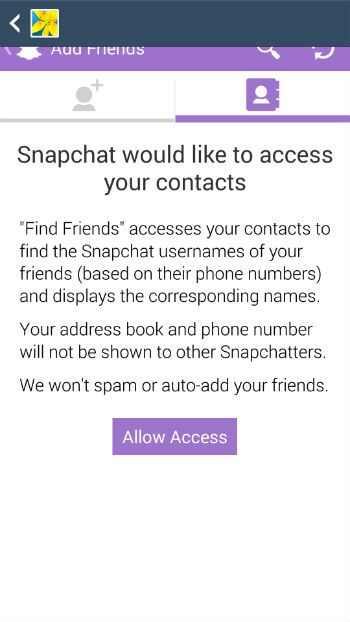 When I depart this planet nothing will matter. Photos. Memories. Great deeds. In the meantime I’ve just started using Snapchat. Even though I’ve been “on” the system for 18 months.

One of the surprises having explored what it can’t do is to find that zillions of my contacts are also on Snapchat and there are many chats (snaps?) waiting for me to see. Amazing. Who’d a thought!

Interestingly I was totally ok with allowing Snapchat access to my contacts list whereas I still haven’t upgraded my Facebook App because it was asking for access to my text messages. It’s about trust, innit.

Don’t betray that trust Snapchat, I am about to start using you.

To finish off with an internet technology angle, Snapchat is of course going to be another bandwidth driver. It will use a lot more bandwidth than a Facebook IM or wall post which I imagine is what it replaces.

PS just sent Anne a Snapchat praising the ham sandwiches in my packup – they were delicious:)