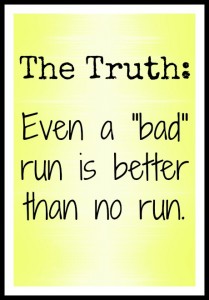 My previous Lincoln 10K run, 3 years ago, wasn’t so great. I didn’t feel comfortable running and at the 7K mark I was pooped. At that point an old school friend that I’d not seen for years appeared, had a chat, patted me on the back and ran off. It felt great and got me over the line.

Its two weeks until race day and I haven’t yet had a bad run. Bully for me, but I’m starting to worry that it will rear its ugly head on the big day. Its broken into my mind during the training. This week, the aforementioned tripping over a dog happened. Following embarrassment and apologies from all parties (even the dog looked down), I convinced myself that this was it, the bad run I’d been waiting for. However, I quickly found my rhythm again, which left me confused. The paradox of wanting to get the bad run out of the way, but being fine to carry on consumed my thinking as I ran and before I knew it I was across my finish line.

I’ve mentioned before about the mind over matter during running, Now I’m sure that positive thinking needs to happen long before the run even starts and that this might just enable me to elude those bad runs once and for all.

With all the inevitability of a home made rope swing video on You’ve Been Framed, today’s run was terrible – running mainly into a head wind, it included a cross word with a lorry driver that was losing his load and a stitch.

Thank god that’s out of the way.

Another excellent post! Pleased that you got the bad one out the way….now you can look forward to the actual race
Love it!

I’d never thought of any run to be a bad run -when I used to run I was always pleased to finish but now, looking back I think I suffered from these as well. Mostly when I hadn’t eaten well or drunk enough in the lead up to a run. Positive mindset and good nutrition will get you through. Well done you’re doing great!