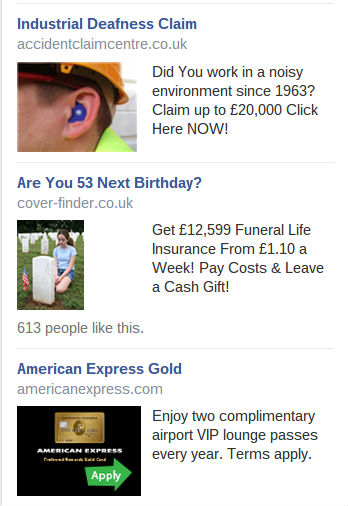 I’ve mentioned this before but I hate Facebook. Their ads really irk me.

Just now I’ve been reminded that my next birthday is my 53rd. I don’t mind that it is my 53rd birthday. I quite like being me. What annoys me is that Facebook have shoved an ad in my face asking “Are you 53 next birthday”. They know damn well how old I am.

They also know that I would have been two years old in 1963 so there is no way I could have been working in a noisy environment since then.

And then there is the American Express ad. It costs a lot of money to get an American Express card. It’s all very well it being usable everywhere in the US of A  (buy Americun stoopid) but there are loads of places in the UK that don’t take it because AMEX demand much higher commission than Visa and Mastercard.

Badly targeted ads from Facebook. They should use Google Ads. At least Google knows I’m thinking of buying a metal shed:).

Gotta go. Picking up a daughter from university. End of Term and she has run out of clean clothes.

Most of the major places in the UK now take AMEX….. certainly the ones that matter where you can run up a large bill. Also the Platinum Cashback Card has no annual fee and offers 1.25% cashback and a series of other statement rebate offers (such as on Small Biz Saturday – spend £10, get a £5 Statement Credit) – and cool things like linking to your FourSquare account for extra offers on checking-in.

That’s my main means of payment – the backup is the Nationwide Select Credit Card, which is commission free abroad using commercial exchange rates and offers 0.5% cashback.