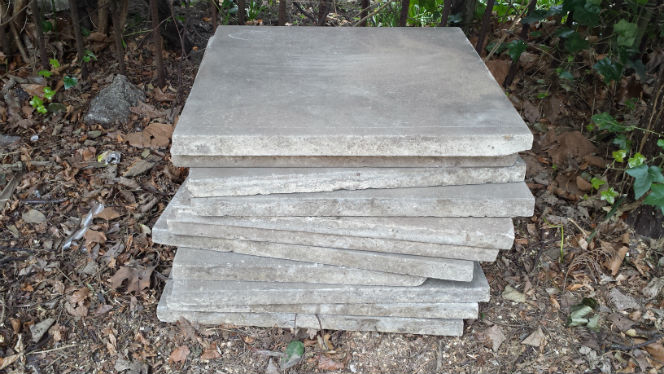 I ordered some concrete slabs off the internet. Bought them on eBay actually. 21 off 600 x 600mm for £57. Had I bought them from a shed they would have been something like £120. They are going to form the base for the playhouse that I’m converting into a shed. We are using the patio where the playhouse currently stands as the new basketball court. As it happens the slabs came from under a deck so it would seem that they are eminently suitable for their new purpose.

I collected them from somewhere in Lincoln. Before setting off I looked up the address on Google Maps and even saw the house on Streetview. V useful. When I got there I had to reverse down a very narrow drive and in the end was only able to shift half of them. They are so heavy I didn’t want to risk knackering the Jeep’s suspension. Going to have to go back and get the others another time.

It seems strange in a world where we live a “virtual” life on the internet that there are actually solid items such as these concrete slabs that intrude on our everyday existence. It’s called reality. I looked it up on Wikipedia: “the state of things as they actually exist rather than as they appear or are imagined”.

Concrete slabs apart we shouldn’t forget that reality is generally much better than the virtual world. It’s a perfect spring day out there – get out and enjoy it:)