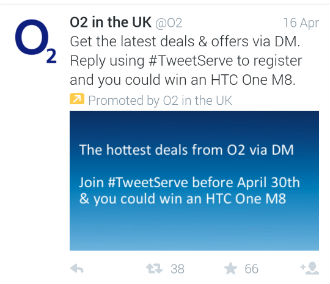 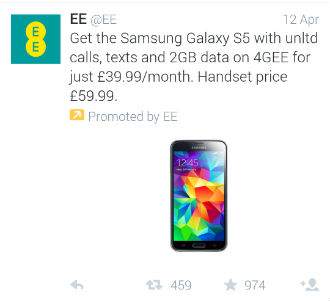 Don’t know about you but I’m seeing a lot more promoted tweets these days.

There’s a sort of mobile oriented theme but presumably that’s just on the twitter client on my dog and bone.

Interesting that Sage is pitched partly at startups. Maybe I’ve been tweeting using startup related keywords. Wouldn’t use Sage anyway. I use Freeagent.

The @katiemoffat one was interesting. A social media expert eating her own dogfood.

Fair enough. Although she and I don’t follow each other I dropped her a line asking how successful was her use of promoted tweets. She replied that it did lead to an increase in followers but that it was an experiment using some free twitter credits.

The question there is what price would you put on a follower if you actually had to pay for it? I guess the O2 and EE tweets are specifically pitching for paying customers. Businesses happily pay for leads.

One also wonders what an acceptable number of promoted tweets is in a given period of time. You typically don’t see more than 3 ads on a web page. How do you decide how many ads should go on twitter?