Yesterday I smashed the screen on my S4. Correction. I accidentally dropped it and the screen smashed. This wasn’t a wanton act of vandalism by a man frustrated with the inadequacies of his communicator.

Although I’ve stuck my SIM in Kid4’s Galaxy Mini i’ve decided that to use that device is too much of a hassle. It wouldn’t let me delete his Google account as to do so would render some of the apps unusable. I did add my personal and business accounts to the device but deleted them before they had managed to synch. I decided I didn’t want my credentials on someone else’s device if deleting them after the fact was going to be problematic.

Now I lie in bed typing on my Acer C720 Chromebook having used it to check Facebook, Twitter, respond to a comment on this blog, read the papers (the news is the same wherever you look), check mails, look at the weather forecast and no doubt do a few other things subconsciously that I’ve already forgotten about. Ordinarily I’d have done all that on the phone. The Chromebook form factor isn’t as convenient for a Sunday morning.

Two other things I’ve not done with my phone spring to mind. One is I haven’t taken a photo of the beech hedge in our back garden. It is just coming into leaf and I quite liked the way that one part of it is budding before the rest showing a little splash of green colour in an otherwise brown hedge. I use the phone a lot in this way, taking ad hoc pictures of things that catch my eye. Check out the photo of petals lying in the road at the end of the post.

The other thing left undone is that I didn’t wake up in the night and didn’t check the phone. Maybe I wasn’t destined to wake up last night or maybe it was because the phone wasn’t there. Why on earth do I need to use the phone at 3am anyway? I don’t.

There is a third “not done” thing. I went out to early doors at the Morning Star without a phone. I also left my wallet at home and just took cash. Normally before leaving the house I check that I have phone wallet and house keys. Yesterday I just checked the house keys. Very liberating. Conversation flowed in the pub and I was 20 minutes later than normal leaving. This was done with a modicum of guilt knowing that Anne couldn’t call me to remind me that tea would very shortly be on the table.

It mattered not. The initial experiment was a success and my first 24 hours without a phone has almost been completed. I’m feeling remarkably relaxed… 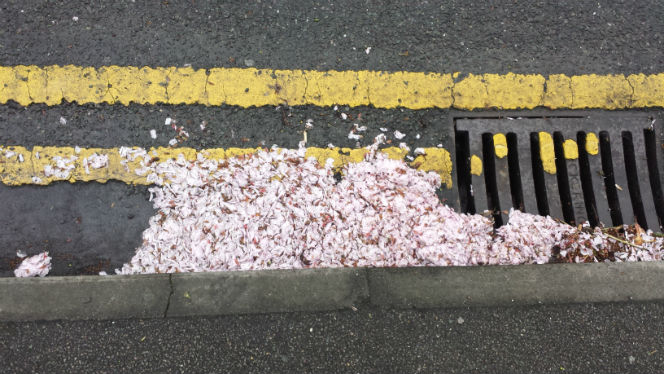 Other posts with with photos:

3 replies on “First night without a phone”

I’m surprised you haven’t got a tablet for day to day home use as I would find a phone a bit small.
I like my Nexus 7 – fits well between phone an ‘puter and makes a good couch/bed device.

The iPhone 5 takes awful photos…. Now I find out they may have faulty home buttons