Latest in the trefor.net series on rainfall measurement techniques involves the use of a bbq to collect rain water.

The beauty of this method is that very little effort is involved. You leave a bbq out uncovered, accidentally or otherwise, and after it has rained go out and see how much water is in it.

This is a pretty rough and ready method and certainly not as accurate as or finely gauged as our first rainfall measurement technique using spectacles as described here. Typical problems are highlighted here:

The technique itself is simple. You just leave the bbq out in an uncovered area (see bullet above re trees) and after a suitable amount of time go and see how much rain is in it.

In an ideal world the WCRMP would have recommended standard bbq sizes for the job so that a measure of consistency can be applied (to the job of measurement – no pun intended). They have not done this (quelle surprise). In their defence this is partly out of a recognition that there are many different makes and shapes of bbq out there and they didn’t want to be seen favouring any one manufacturer.

In my mind this was a mistake and one that has meant that this method of measuring rainfall has yet to be widely adopted. You certainly don’t hear weather forecasters on the BBC (other services are available – it’s your choice) mention the bbq technique. Usually they only say whether it is going to be bbq weather or not. With the right equipment all weather is bbq weather.

Often at times like this I am asked whether I can recommend a particular make of bbq for the job. Ordinarily when recommending a bbq I’d say a Weber but in this case when the specific feature requirement of rainfall measurement I’d say that Weber wasn’t right. Webers usually come with the aforementioned vents in the base and have bowl shapes that are particularly difficult to measure. Also Webers are expensive and you wouldn’t want to reduce its lifespan by introducing the problem of rust.

You would be wrong to think I was therefore suggesting a cheap bbq where it didn’t matter if you had to throw it away after a year or two. Cheap bbqs tend to have millions (yes millions) of screws and nuts and bolts and take hours, days1 even to assemble. I can only offer our own solution which is a stainless steel bbq/firepit that can happily be left out all year round (though we don’t).

Our firepit has a flat bottom and regular if sloping sides that would make it easy to measure the overall d/h number fwiw. The pictures below show our bbq in action for rainfall measuring. The first shows the level of water obtained in one wet night earlier this week. The second photo shows a pretty much full bbq, a level reached by the end of the afternoon after that first pic.

This was one wet day. Now despite having taken the time to describe the bbq method for rainfall measurement I have to confess that I’ve not gone as far as calibrating our bbq for this purpose. All I can say is that it looked as if we had roughly one inch of rain overnight and maybe another couple of inches during the day. It would have been a simple matter to use a plastic ruler taken from a kid’s pencil case but I didn’t.

It is recommended that you don’t risk annoying a kid by doing this and go out and buy a ruler (6 inch clear plastic should do the job) that can be used specifically for the purpose, perhaps keeping it in a convenient spot together with your other bbq cooking utensils. By using the same ruler every time you maintain consistency and remember that the kid’s pencil case is not always readily to hand during term time.

The day of the photo shoot was in fact and as is plain to see a very wet day. Very wet days like this tend to cause traffic chaos in Lincoln and this one was no exception. There was an accident downtown (maybe a mile and a half away) and the traffic tailed back past our house. It was quicker for me to walk to the Morning Star for a swift un (Anne is away) than it would have been to drive.

It might in theory be possible to derive a measurement for rainfall based on the length of traffic tailbacks but this would be unreliable and be very difficult to calibrate. The traffic tailback method would undoubtedly be of interest to BBC weather forecasters as it would allow them to engage with the traffic and travel department. Cross departmental relations are encouraged within the Beeb as it is seen as providing better value to the taxpayer  by maximising the efficient use of existing resources. Also they at the Beeb like having their cross departmental team building nights out – self funded no doubt as such evenings if taxpayer funded would mitigate the benefits of the aforementioned efficiencies.

To conclude, this post has described a very good, easy to implement if inaccurate method for measuring rainfall using a bbq. The bbq is not currently in rainfall collection mode. I have it stood up on its side as I didn’t want to go to the effort of emptying it later. It’s all about choosing your moments and I don’t actually care whether I know how much rain has fallen anyway. Don’t let me stop you though… 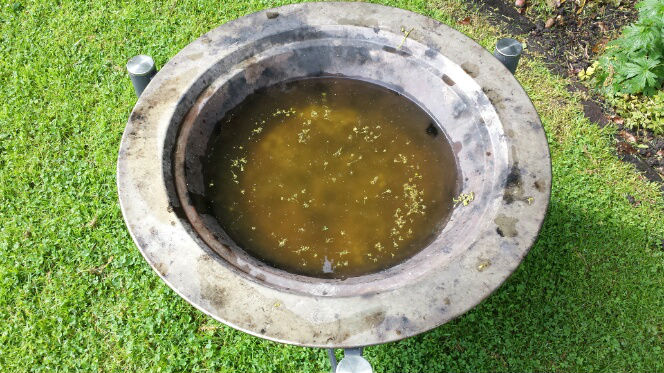 pic2 – level by the end of the day 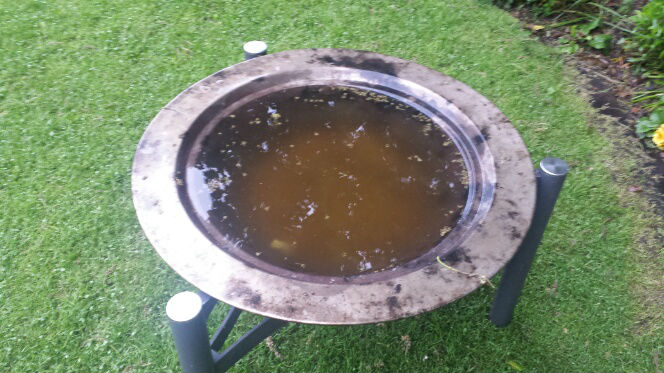 1 When we first moved in to our house towards the end of the afternoon I nipped out to buy a bbq – it was a lovely sunny day and we figured it was the right thing to do. In the end it looked like it would take so long to put it together (millions of screws) that I had to go to Tesco and buy a couple of those disposable bbq trays that sort of do the job but are usually quite crappy. Ended up finishing the job the following weekend.