Photographer-wise I have long aspired to ‘avid’, seeing photos in my mind’s eye everywhere I look, composition, line, contrast, patterns, snippets of structured vision that I ached to capture and share. And like so many of us these days I am reveling in the sheer liberation afforded (key word, that) by digital technology’s heist (takeover? coup? overthrow?) of the picture taking discipline. 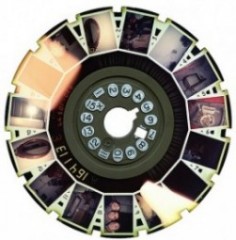 My first camera was a Kodak Disc 6000, which is sure to cause at least a cringe from anyone out there who remembers the disc camera wave-fad of the early 80s. I don’t remember what I paid for that camera, but as I was 17 and sacking groceries for pocket money at the time I know it couldn’t have been much. I do remember quite vividly, though, realizing that the cost of film and its development was going to shackle the intense photography enthusiasm generated by my camera purchase…even with the Eckerd Pharmacy down the street offering free double prints! In retrospect, it is probably good that I didn’t have the resources to go mad snap-snap-snapping my disc camera, considering the extremely poor quality of the film and the pasturing of the technology by Kodak before decade’s end. Bad habits avoided (mostly), the path taken not long enough to require a painful walk-back, and not too many memories relegated to a grey-and-forever-moving-to-black hole.

My second camera (I probably should state here that I am not — promise! — going to anecdote every camera I have ever owned…really, I’m not) was a Pentax SF-10, a “real” camera (35mm SLR) with a 28mm-80mm zoom lens. My answer to the 1988 iteration of that omnipresent end-of-year question “What do you want for Chanukah?”, this aspirational “finally getting photography serious” device came to me by way of a parents-grandparents-aunt/uncle coalition. The entire kit came to a little under $600, which I could never have swung myself seeing as how at the time I was working just-up-from-entry-level for Grey Advertising for $16,125 annual (not a typo). And, as with my previous camera, my ardor for my new photo friend once again took a shot to the gut when the cost realities applied their wink and slap. Still, I was moving forward, this time brandishing a camera that was immune to the whimsies of trend, a device that once I could actually afford to operate would provide literally decades of picture taking pleasure and thousands of terrific photos…a camera I could use to teach photography to my children1. 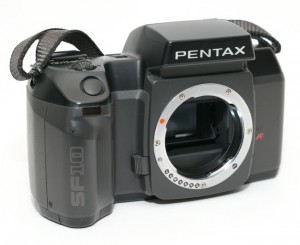 Of course, I did eventually reach a point where I could afford to keep my Pentax SF-10 on a regular film diet, though my photography ambitions were never enough to overcome the ever-active cost calculator in my head from going to work every time I pressed her shutter. Snap. $0.20. Snap. Another $0.20. Snap. $0.20…and a third of my roll is gone. I was really only able to clear this lodged-but-good budgetary impediment when traveling, accomplishing this by buying film in bulk and rationalizing the making-memories aspect of it all (a little victory that resulted in roughly 2000 photos taken throughout Europe, Japan, Thailand, Malaysia, Hong Kong, and Russia between 1994-19982). As for using that camera, though, to better learn photography principles, science, and technique (let alone experiment with such gleaned knowledge)? No. The CODB defeated me every time…well, that and the distinct lack of quick-if-not-instant gratification (taking multiple shots of the same subject at different aperture and shutter speed and focal length, jotting down notes on each shot at shutter press, waiting until the roll is finished, the rigamarole of processing, analyzing the prints).

Then along came digital photography. Not all in a rush, mind you, the way new end-user tech seems to appear these days, sprouting up from the Boolean muck with a built-in early-adopter audience already poised, prepared, and ready to purchase. No, more of a Rollout for the Rich. The first digital camera I saw was in the hands of friend of mine at Dell sometime in 1996, a man keen to the latest cool thing and with enough bangable bucks to chase down some of the same. I don’t recall the brand or model specifics, but I do remember the device looking enough like a compact camera, but having a distinctly non-camera color (an off-white casing, leaning towards beige). Mostly, though, what I remember was the one-inch screen on the back of the device that displayed the photos taken. I could actually see the photo that was just taken! And I could see other photos too! No film? How are the photos developed? Can you only see them on the computer If so, fat lotta good that will do you! How much did you say that thing set you back? My SLR costs less than that!

Early days. Digital photography soon became a hot topic of discussion, and before too long a few more digital cameras started to find their ways into the hands of people I knew. Prints could be had, and though they usually didn’t look like anything special, the fact that the film cost had been taken out of the snapper equation really was a mind-opener. Battery power was something of an issue, but not really so much so in comparison to film when taken at a shot-to-charge ratio. And though the memory chips at the time were infinitesimally small in comparison to what we know today, so were the photo file sizes, and thus a decent number of exposures could be rendered to a chip. And those chips could be removed from the camera at any time and taken for processing!

Being typically a third-generation adopter — let the Can’t-Waits, Fanboys, and Posers pay off the R&D costs, I always say — I opted to monitor the dawn of digital photography from the cheap seats, waiting for the tech to mature and a reasonable Cost of Entry. I continued to hold my Pentax SF-10 close, stroking its heavy, well-chiseled chassis, but using it only sparingly because — goshdarnit — film was expensive! As always, I was seeing photographs wherever I set my gaze, photos I wanted to take, to own — to STEAL — and to share with whoever could or might be bothered to try to see what I had seen and captured. A new Millenium was beckoning…would I be able to capture the Y2K chaos at just 36 exposures per roll? 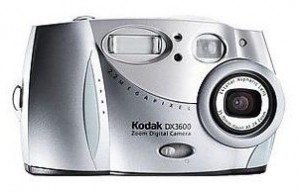 Ah, the moment. But no. As much as I’d like to be able to conclude by saying that I made the leap of faith to digital in time to capture the Eiffel Tower’s twinkling in of 2000, the truth is it would be another 11 months before I found my way to my first camera sans film, the Kodak EasyShare DX3600.

1 While I was blue-skying early on over the long, rosy, heirloom future of my Pentax SF-10, the Dycam Model 1 — generally accepted to be the first commercial digital camera — was being prepared for market.

2Roughly the same number of photos I took over the past month with Leyna, my trusty Leica D-Lux 5.

2 replies on “Everything Looks Worse in Black and White”

My first camera was a Kodak pocket instamatic which took 110 cartridges and was always jamming. The problem I had with film as opposed to pixels is that of a roll of 36 photos only 2 would be any good. The success rate seems somehow much better these days, largely I’d imagine down to improved camera and autofocus technology.

It all comes down to the glass, Tref, and with those old 110s (of which my disc camera was just a different iteration, really) the glass was as often as not plastic (or, at least, parts of the lens were plastic). The size of the film didn’t help matters much, either, but the darn things were easy to carry around and were always ready for a quick snapshot…one that was worth having 5.6% of the time (by your reckoning, and I see no reason whatsoever to refute it).

Over the past year I have returned to film to some degree (and will inevitably write something about it here at some point), partly in preparation to learn the dark(room) arts with my brother-in-law, partly as an experiment in slowing my eye down to improve shot consideration, partly because I got somewhat caught up in the whole Lomography thing and wanted to get my claws a knuckle or two deep in. I have picked up a few classic old compact 35mm cameras to that end, and I feel comfortable saying that the cameras today are no better constructed than they were 50 years ago. As for autofocus, though? Well, that sure is a nice thing to have now in even our least expensive snappers, isn’t it? 🙂