Watching the World Cup matches over the weekend I was struck not for the first time by the lightning-quick tendency on the part of the players to flop to the turf at the slightest contact with a member of the opposing team.

Nothing unexpected, of course, as even the most casual fan of the so-called “Beautiful Game” has come to expect an abundance of ugly on-the-pitch acting antics. I didn’t expect, though, to flash so easily to the parallel of Apple’s hair-trigger propensity to sue any competitor that wandered into their path (usually Samsung), claiming an assault on their design and utility, “original” though it may be. 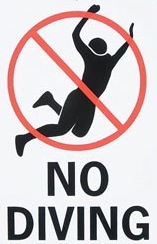 Extract tongue out of cheek.

Of course, one good turf dive deserves another, and the non-Apple entity in all of this (usually Samsung) has proven fast to counter-sue. All of which just leads to more suing and counter-suing, and so on and so forth…hey, just like the players do in association football (Americans out there are invited to read that as ‘soccer’)!

By this point players of association football — henceforth, I will just write ‘football’ and assume my American readership is sharp enough not to lose the plot — have not just accepted flopping as a reality of the game, but no doubt consider it to be a skill worthy of serious practice (rehearsal?), one that they may be called upon to perform without hesitation at any time or may even be asked to condition themselves to do in certain circumstances. And this goes not just for those playing footy/footie at the highest levels, but through the ranks, all the way down to the kiddie leagues. Really, I mean, does it get any cuter than those five-year-olds rolling to the ground holding their shins and screaming for a Red Card?

Fair play? If it ever was it certainly isn’t today, when instead it is gamesmanship that is so often revered and celebrated. It matters not nearly as much how the gooooooooooal was achieved as the fact that it was achieved. Your opponent has gathered up a lethal storm of momentum? Flop to blunt the tide. Need a breather, to regroup? Dive, grab knee, and scream for justice. Innovating not and iterating plenty and wanting to avoid notice of such? Cry out to a referee…er, judge to stop the other guy (usually Samsung) before he can catch up to and stop you.

Now you might be thinking, “OK, Kory. Clever. Bit naïve, though. Football is all about the sport! Competition! The thrill of victory and the agony of defeat! ! Business is just about money!

And I am the one being naïve?

One reply on “Fruity Simulation”

Well, us Brits, hate the divers in Football. Tis all I know. Creeping more into the game over here, and some do applaud its clever use, which is a rather baffling opinion. Perhaps the latest tech will slowly weave itself into the game more, now we have goal line technology. A chip in the brain that tells us when a player has dived on purpose?! Ah to the future….