Virgin East Coast website must be affected by the wind

You see before you the words of a disappointed man. I have some trips coming up and thought I’d just pop on the Virgin East Coast website to check out the schedules and pricing.

To my annoyance I was unable to access it. Darn Ja.net I thought to myself. Then I tried from my mobile and also a few other sites – this one for example. No problemo so not ja.net after all (sorry Rob Evans).

There’s been a lot of wind today. My pal Rob was delayed because wind had blown some plastic sheeting onto the overhead electric cables somewhere near St Neots. The hazards of modern train travel eh? I thought maybe the website was similarly affected. Or maybe lots of people were trying to access the website to check if their train was running. Wouldn’t surprise me.

I knew what to do. I looked up the Virgin East Coast titter account. It goes by the handle @VirginTrains_EC. Amazingly the last tweet from this account was on February 28th: 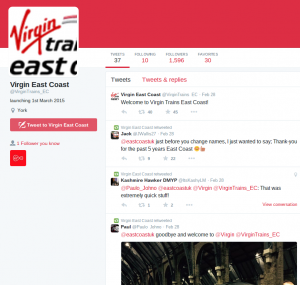 I insert a screenshot for your general information. Looks like they must have had a flurry of followers when they set up the account but they will all now be disappointed.

Seems a remarkable oversight on the part of @VirginTrains_EC. The old @eastcoastuk account seems to have had all it’s content removed.

I have nothing else to say really. I was motivated to write this post because I didn’t think it was a particularly well thought out social media plan on the part of Virgin East Coast.

Now that I’ve written all this the website is back up. Winds must have dropped. It’s too late though. Having gone to the effort I’m leaving the post as is. I await with interest to see what improvements Virgin have to offer. So far all they seem to have done is delay when breakfast is served on the 07.20. Instead of dishing it out as soon as we leave Lincoln I now have to wait until Newak. Also it was overcooked the last time I had it. Ah well.

I wonder if they will notice this post? It gets tweeted. 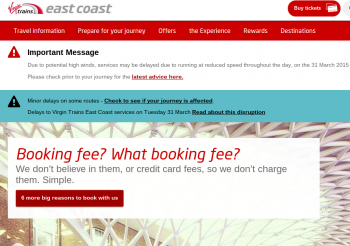