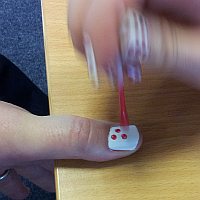 and has been known to jump out of planes “just for fun”.

Andrew is clearly a happy go lucky bloke and nothing excites him more than getting ready for a night out at the weekend. This weekend is a big one. It’s Children in Need.

Andrew really likes to sit in front of the TV watching all the celebrities doing their bit to empty your pockets and raise cash for a worthy cause. 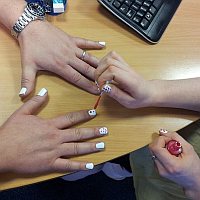 Andrew though is no couch potato and today has got off his butt to raise some cash himself. In fact as you can see from the pics he has gone more than the extra mile.

Andrew has gone and had his nails done.

It took a whip round to do it. It’s funny how the whole company responded to the opportunity. The £145.18 was raised in no time at all.

As you might imagine it took Andrew some getting used to, 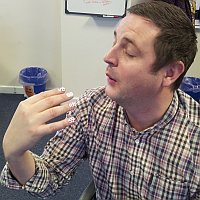 especially the drying bit. There was some serious wrist action going as you can see from the photos and no small amount of puff.

Anyway he got there in the end and has been strutting round the office proudly showing off his nails to everyone generous enough to have donated.

The lad has promised to keep the varnish on for the whole weekend so that his mates down the Rose and Crown on Saturday night can take a butchers. Perhaps they will buy him a pint – he deserves it. They should at least add to the donations already made. 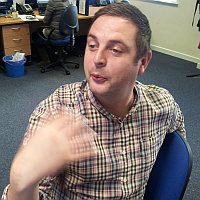 The last photo is in stark contrast with that of the header where he is trying to look tough.

In it he is obviously a happy chappy and has already worked out the best position to hold his arm to display his nails to best effect.

Well done Andrew, proud to be your workmate.

Well done also to Kirsty Watt, the ingenious instigator behind the important fund raising initiative. She is evidently a talented 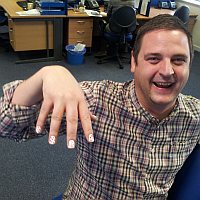 Meet Andrew North – modern man and all round good egg.

It’s Friday afternoon. The weekend beckons and with it the barbecue, beer and a total chillout.  With that in mind this is a totally gratuitous blog post. Andrew North is our star Director of Account Development.  He is very good at his job which is why in the picture he walks tall amongst the giants that are his staff.

It may not be clear from the photo that the rugby ball is signed by yours truly:) I have a different one at home that is signed by former Wales rugby giant  Scott Quinnell. I paid bit more for it than the one I signed.

Just to make life interesting I have decided to give away a Timico mug to the first person who can tell me who is the mayor of Timico on Foursquare 1. 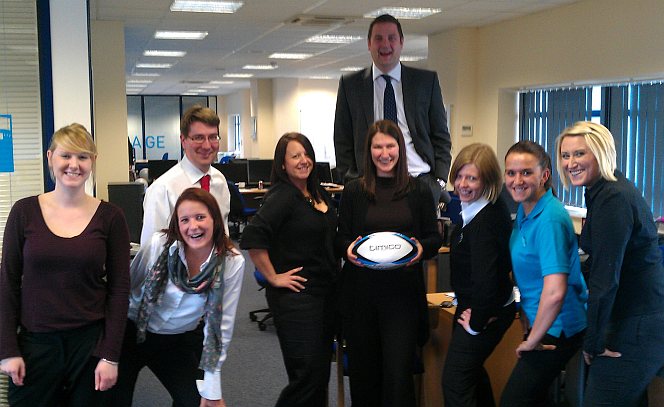 Btw I’ve just realised that apart from Andrew there are 8 of them in this photo.  Just enough to form a scrum. From left to right are Jess, Simon, Sophie, Emma, Kirsty, Andrew, Clare, Kate and Gemma. They make a great team.