It is interesting to see the mix of traffic on the Timico ADSL network and thus what is taking up the broadband bandwidth usage. As a B2B ISP the profile will be dramatically different to that of a consumer provider.

For example the amount of bit torrent traffic is fairly low at around 6%. This compares with up to 40% sometimes seen on residential ADSLs. There are legitimate business uses of P2P but it does suggest that a few customers are hitting it hard. The nature of P2P is that it will hog all available bandwidth which actually makes it a highly efficient protocol for transferring large amounts of data. In fact the 6% of P2P traffic on the Timico could well be largely down to half a dozen ADSL2+ customers hitting it hard which represents a tiny proportion of our customer base.

The usual business type applications such as email and VPN are apparent on the chart but the biggest driver is clearly simple web browsing. No great messages here regarding bandwidth growth.

There are however some hidden gotchas. This chart was a snapshot over one working day sometime recently. It does not, for example cover the Ashes cricket matches where video streaming saw a huge growth as people at work tuned in on Skyplayer. How many business managers knew that their staff were watching the TV all day instead of working?  It is costing them twice – in the salaried time spent watching the cricket and in the cost of the bandwidth.

Also it is daytime usage and does not cover night time where a significant amount of file transfer traffic takes place. We do see a small rise in P2P in the evenings –  Timico provides thousands of corporate homeworker ADSLs. However the overall bandwidth falls significantly for us after 5 o’clock which is the exact opposite to what is seen in the consumer world. It will be interesting to periodically track the changes in usage and look at where the trend takes us over time. 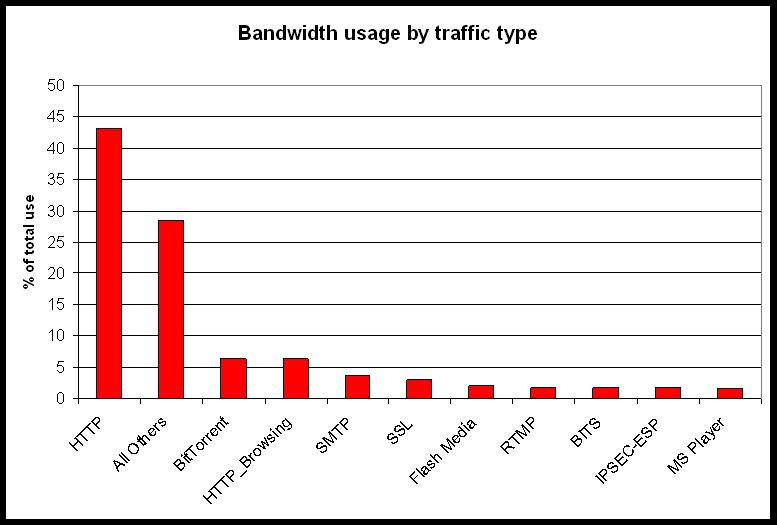 As a footnote to yesterday’s posts from the ISPA Legal Forum one of the things to have stuck in my mind is that consumers are not being consulted in any part of the discussion surrounding P2P filesharing.  Whilst the inter industry argument rages we are in danger of losing out on some basic human rights.