We live, always, in interesting times. The global finance system is in crisis, again. There have been riots on the streets, again, with courts working through the night to process the cases of criminals caught breaking, stealing, committing acts of arson, violence, disturbing the peace, assault and grievous bodily harm.

It is natural to react strongly against this and I’m not sure I’ve seen anyone particularly busting a gut to defend the perpetrators. A petition has been started asking that anyone found involved in these illegal activities be deprived of their benefits.

Social media seems to have played a part in the organisation of these riots as does BlackBerry Messenger and the Prime Minister in his speech to the commons today said:

“Free flow of information can be used for good. But it can also be used for ill. And when people are using social media for violence we need to stop them. So we are working with the Police, the intelligence services and industry to look at whether it would be right to stop people communicating via these websites and services when we know they are plotting violence, disorder and criminality.”

This is great in principle but of course not as easy to implement. Also how do we know in advance that they are plotting violence? Do we monitor everybody’s social networks one on the off chance that someone is plotting to do wrong?

For what the PM is asking for there is a parallel in the world of mobile communications. During times of emergency the cellular network can be switched off for everyone except the Emergency Services.  This is down to the need to keep the low call carrying capacity network open for priority communications rather than a desire to stop miscreants using the service.

The situation is slightly different as regards social networking and we have to take great care that we don’t overreact. Twitter, for example, was being used to channel help just as much as BBM may have been used to coordinate the riots. Moreover the fact that these people are communicating using social media tools is likely to be a means to actually tracking them down and arresting them. People have already started being reported for telling friends on Facebook what they have been up to.

There are other parallels concerning internet technologies and the desire of government to control them – website blocking and filtering for example. Where do you draw the line and who decides when a website should be blocked? It has to be a judge. The same applies when considering situations of social unrest as we have just been seeing.

On balance I suggest that we must take great care when considering the application of control over social networks that the PM is calling for.

Note that at the time of writing the HM Government e-petition site has crashed and you get the following message: 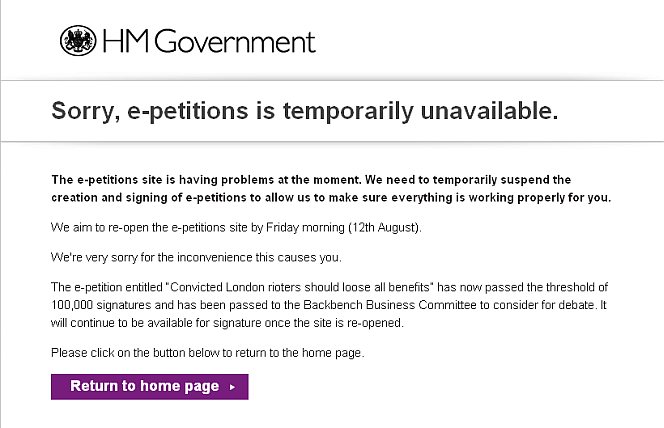