I’ve started to separate personal social media accounts from the blog. Although trefor.net is named after me I want to depersonalise it so that downstream it wont rely on me. I ultimately envisage a small staff of developers and editorial types running the site whilst I swan off to conferences in exotic places, the golf course etc etc.

So far I have separated the google accounts – [email protected] is now a pure play gmail account (if I can put it like that) and have done some work on Twitter. @trefornet is the “official” business twitter handle though not one of those verified jobs you see with a tick – one can but dream 🙂

There is already a trefor.net Facebook page (like it if you will) though it will need some work doing to it and regular post upates. That will come more easily when I have a developer on board.

I have also enabled a Google+ profile for [email protected] This will need some thought as to modus operandi. Google likes to recognise people rather than businesses. I suspect that we will end up with every bit of content frm the blog being linked to on the trefor.net page but only my own stuff on my personal one. There is already a trefor.net page on Google+ that hasn’t been updated for years.

LinkedIn will also need some work. I’ve updated my profile but will have to give some thought as how best to use it. LinkedIn, which I used to largely ignore as a vehicle for people to get jobs or sell things, is going to become more useful (now that I’m selling things). Networking is the name of the game really, in more ways than one.

Much of the development of the blog will rely on having a developer on board. So far there hasn’t been a rush of applications so I’m going to have to step up the activity levels there. Working out of a business innovation centre in Lincoln this seems to be a common thread. A business these days needs to work online and needs web development skills.

There is a good Computer Science Dept at the University of Lincoln so it isn’t as if there isn’t a supply of grads out there. Lots of students would like to stay in the town where they went to University if they could. They typically associate the location with having a good time. At least that’s how it was in my day :). Next week I’m going to pop round and have a chat with the prof. He’s just round the corner from the office.

The whole social media thing is important because this site needs to be a living organism, interacting with its readers in many ways. What’s more by “embedding” itself in social networks we will know more about the readers although I’m totally cool with people using anonymised credential when leaving comments. The value of a business lies with its customers and whilst they aren’t paying for anything,the readers are in fact customers.

As Trefor Davies over the years I have built up a reasonable sized network of contacts using social media. Trefor.net the business is tarting from scratch although obviously there is going to be a high degree of cross fertilisation to begin with. It will be interesting to see, for example, how the Twitter follower count for @trefornet, currently  0, grows compared with @tref, currently 2,572. @trefornet will be more informational and a feedback channel as opposed to the drivel that @tref often spouts:)

Anyway that’s enough waxing on. Got social media profiles to write etc and I’m off out to lunch at a posh restaurant in Nottingham today so must go. 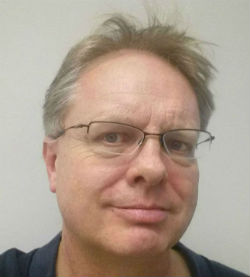 Since Monday I’ve been trying to set up a Google Apps for Business account for trefor.net. I kept getting rejected with a message saying that “the domain trefor.net was already in use”.

I was using it via my personal gmail account – picking up trefor.net emails pulled from my Timico POP3 mailbox. Deleted any reference to trefor.net in my personal mailbox then when Google continued to reject my efforts to register a new apps account I discovered you have to wait 24 hours for “things to filter through the system”.

Over 24 hours later it still didn’t work and I made a comment to this effect on Twitter. Twitter is a truly powerful networking tool.  @AndyCDoyle offered to help and this lunchtime, having started to raise a ticket with Google, he found that there was already a Google Apps account for trefor.net. Funnily enough it was one I registered meself years ago. I’d totally forgotten about it.

A password reset came through to the recovery email address, my own personal gmail account,  and hey presto I was up and running. Ish. It does take time to learn how to navigate your way around and I can see why a business might want to contract the setup out to an IT consultant.

One thing that flummoxed me was that in all the help guides it says you have to verify that the domain is yours. None of the relevant fields appeared on my screen so either I had already done it (certainly don’t recall that which I’m beginning to find out perhaps shouldn’t be a surprise) or when I signed up for Google Apps you didn’t need to do that step. I suspect the former is true.

Setting up email was easy. I just had to modify the Timico hosted zone files so that the MX records pointed at 5 google servers. Once that was done it worked straight away. Simples. I can now add aliases to my heart’s content and because the account was set up before Google started charging it’s all free. Result!

It would appear that I can have up to ten users in the free account which is going to do me for the forseeable future. Not figured out how much storage I get yet but I have over 100GB in my other account thanks to me buying a Chromebook so that should be fine for a couple of years.

Important to make a bit of progress every day and this is progress.

PS As you may have noticed at the top of this post I’m experimenting with new profile pics. Have managed to change my personal gmail pic but struggling with  one for the new trefor.net account. Keeps telling me the jpg photo is an invalid file. Google Apps is great for many things but it ain’t perfect and seems to have plenty of bugs that need kluges to work around. Not figured out a kluge for the profile pic yet.

PPS big thanks to Andy Coyle. Was surprised to hear he has a broad Mancunian accent. Shouldn’t have been because he lives in Manchester but that’s Twitter for you. Andy there will be a beer waiting for you when I come up for UKNOF27. Also you might want to think about using his services especially if you are in the Manchester area. His website is here.

I bought a kettle last night, or at least Anne did when she was in Tesco. Uhuh I hear you say?

The new trefor.net offices (room 18 in Sparkhouse Lincoln) are in a managed offices building purposely built for startups. It’s great fair play. The only thing is that in finding one’s feet (if one may express it in that manner) one finds the little idiosyncrasies (I had to check the spelling of that word) with one’s accommodation. At least they are things that you have to get used to (slipping back into the vernacular).

This little idiosyncrasy is that the kitchen doesn’t have a kettle. I saw someone wandering along the corridor kettle in hand and thought oy oy, nicking the kettle eh? No as it turns out. Everyone has their own kettle. Fair enough.

Yesterday was my first day in the office. I bought a cup of tea from the caff downstairs. It cost £1.65 or something similar – large one of course. Not sustainable though. This is a start up for goodness sake. At umpteen cups of tea a day we’d very soon be going back to the well for refinancing. I’d rather keep the funds for beer.

For the rest of yesterday I contented myself with drinking water from the recycled cardboard cup that the caff had given me.

Today on the way down to work – it’s a 30 minute walk from my house – I’m expecting the pounds to drop off – I stopped off at Tesco Express and bought a pint of milk and a box of PG Tips. When I got in I made a cup of tea. In yesterday’s cardboard cup. I forgot to get a mug.

Later on I’ll pop out to Debenhams and treat meself to a new mug. You can do that when you work for yourself you know 🙂 ! It’s only round the corner. Handy.

I did wonder what the etiquette for leaving milk in the fridge would be. Will it get nicked if I leave it there? Others seem to have taken the risk so I’ve scribbled the letter T in biro on the lid and put in in there. What’s the downside? 60p? I could always  borrow someone elses 🙂 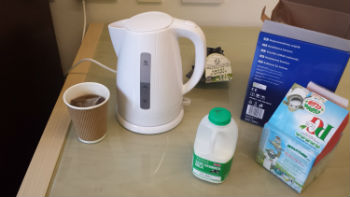 Aside from the mug buying decision I think I’ve also just about decided to invest in a small drinks fridge for the office. The sort with Budweiser branding etc. I’m not a Budwiser drinker but it looks cool enough (pun not intended – it just slipped out). That way I can also keep other forms of liquid in the office at the correct temperature.

The inspiration for this was Sir Terry Matthews who has, or used to have a drinks fridge in his office. V civilised I’d say. I’ll keep you posted re the fridge and the mug. I know it will be of interest. I’ll also have to get some trefor.net branded mugs done at some stage. We will have to get the megamug competitions going again.

Just to finish off on the right is a photo of the current brewing setup.