Telling it like it is in real (ish) time. From left to right Dr Henry Kissinger, Trefor Davies and Calum Malcolm at the Cisco House at the Olympic Park. 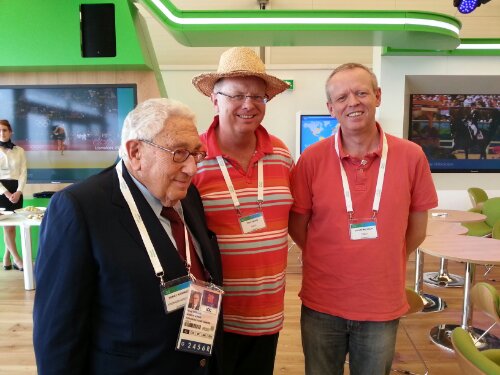 Life is for living.

Posted from my Samsung Galaxy S3 courtesy of Cisco WiFi.

It rained yesterday. It’s been in the news. Trains cancelled or stranded unable to move due to “water on the line” – millions of gallons of it. In Lincolnshire we saw 33mm of rain fall in one day in a month that has an average rainfall of 52mm – for the whole month that is. Gigantic crashes of thunder reverberated around the Timico HQ building in Newark and flashes of lightening lit spectacularly the town darkened by the black anvil clouds above. The good honest folk of the borough took shelter wherever it could be found. Police cruised the streets in 4x4s interrogating the occasional stray pedestrian as to their sanity or motives. Noah would have been in his element.

So of course I went to play golf!

I left that last sentence as a one liner on its own for effect. Truth be told we played golf later in the day after the rains had gone. It was a warm summers evening in Belton Woods where the (by now) annual Timico golf night out took place. I hadn’t played for a while so took a few holes to get going but managed to get back into the groove. The course was somewhat waterlogged but my trusty Dryjoys kept my feet completely dry and a great time was had by all.

The videos below represent live action putting scenes of me, Kirsty Woodman and Dean Bruce, neither of whom had played before but did very well. That is all.

Despite on occasion being known to criticise the UK government for policy matters relating to the internet I am not a particularly political person. I have had a go at both (New) Labour and the current coalition.

The one thing I can’t fault them on, whatever their political hue, is the names of the politicians involved. Here we are talking David (Dave), David, George, Nick and looking back a bit, Tony and Gordon.  at Timico the leadership team comprises a Tim, Chris, Neil, Jonathan, Steve, Andrew, Luke, Sandra, Geoff, Calum and Tref – a good spread from around the British Isles.

What I just can’t understand is how on earth anyone could consider being run by someone with a name like Mitt or Newt. I can ascribe Barack to being a cultural/language thing – a bit like a bloke called Nicola running France. Angela in Germany seems positively normal!

Perhaps the Americans have done some market research and picked the “most electable name”. I fully expect to see a Giraffe or an Aardvark running for the US Senate in future – the only possible reason in my mind that the UK media would want to report such an event.

The only possible excuse I can think of is that they needed to find candidate  names with available domain names but I haven’t done any research to validate this theory. Any original submissions on this proposition could well be published in full.

This morning I joined Empire Avenue and got the ticker symbol TREF – v important I’m sure you agree. I did it because people I interact with on Twitter have done so and being a sheep I followed. I hooked my Empire Avenue account up with Linked In, Facebook, Twitter and YouTube and then bought 100 shares in eBay.

Whether this was a sensible thing to do I know not – the account hook-ups not the eBay purchase which I don’t care about either way. I am really trusting the application.

After a bit of a browse I decided not to waste any more time and left. TREF was secured. At this point the responsiveness my wireless keyboard and mouse began to slow down significantly and I was hit with anti virus messages on my screen. Uhoh.

To cut a long story short thanks to Michael our IT guy I eventually got rid of the screen and am running full system scans using AVG and malwarebytes.

The last time I picked up a virus it wiped me out for a week and we had to rebuild my machine. That was the week I really road tested the iPad and found it deficient. So this time you can imagine what was going on in my mind. I can’t afford to be without a PC for any length of time.

END_OF_DOCUMENT_TOKEN_TO_BE_REPLACED

The internet is a continuously changing body of many thousands of networks small and large connected together, mostly for the greater good.  The functionality provided by the internet is growing at a mind boggling rate. The London Internet Excange (LINX) as one of the world hubs where these thousands of networks meet to exchange traffic has just expanded its remit to include chutney peering.

Chutney peering is very similar to the peering of  internet traffic. The photo in the header (courtesy of @thomasjelliott – click to see more) shows the worlds first ever chutney exchange at a LINX meeting. The two peers are Timico CTO Trefor Davies (left) and Entanet CTO Steve @routerfixer Lalonde.

END_OF_DOCUMENT_TOKEN_TO_BE_REPLACED

The pigeon versus broadband race last week generated a phenomenal level of interest. It must be said this is an illustration of the power of the BBC – although of course the fun nature of the event itself must have helped.

The race, which involved near constant media exposure throughout the day, was covered on BBC Radio 2,3,4,5, BBC1 News at 6.30 and 10pm, BBC Scotland, Humberside, World Service and Lincolnshire (they are the only ones I know of). The first radio interview was a 6.15 am and the last, Radio 5 Live, was at around 6.50pm

It was the 5th most popular item on the BBC website on Thursday – by 6.18pm it had had 92,357 story views, competing mainly with the Pope’s

END_OF_DOCUMENT_TOKEN_TO_BE_REPLACED

Short amateur video of the Rory and Tref pigeon versus broadband stunt from last week.

This rare video footage was uncovered from the archives this lunchtime when I was looking for some photos to send to the Skegness Standard who want to cover yesterday’s Rory and Tref pigeon versus broadband race.

You will note the firm but fair grip that must be excercised on the racing pigeon prior to launch.

This is the video that failed to upload from Furrows Farm to YouTube in yesterday’s Rory and Tref pigeon versus broadband race. It is complete and unedited so you might not want to sit through it all. On the other hand you might (we are all different – witness daytime TV).

For reference it was a “number 2 back and sides” at Antonio’s on Wragby Road in Lincoln. Also for reference I went to the Isle of Man for my holidays this year – information that didn’t come out during the haircut.

END_OF_DOCUMENT_TOKEN_TO_BE_REPLACED

The great Pigeon Versus Broadband race began when the birds were set off at 11.05, and they clocked in at the loft 1hr 15 minutes later. At that time the broadband upload to YouTube was only 24% complete, and then only after having to reset it as the connection was dropped.