At 10am this morning, 28th November 2011 we officially took delivery

I’m not even sure there was a physical ceremony. If there was I wasn’t there but the new build is certainly buzzing with engineers doing their stuff. 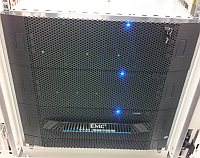 Progress is going to be rapid now with the official launch/opening ceremony due on Wednesday 18th January. The box on the right is one of the EMC SANs I showed being delivered on Friday.

The initial environment will have Juniper in the core network with VMware running over Cisco Nexus and EMC. I’ll post more detail on this as we get nearer launch though if you urgently want to know more drop me a line at [email protected]

7 replies on “We are in! – new Timico datacentre”

By the way the posts on this blog are going through a phase of might be termed uber geekiness. Pictures of bits of networking kit aren’t everyone’s idea of an exciting read. The readers of this blog are a highly intelligent and eclectic bunch and I’m sure those of you uninterested in the deep detail of virtualisation and next generation cloud services will wait patiently for the next “win a Timico mug” competition. Some of the pics are at least colourful 🙂

I am also pleased, nay excited to announce a mince pie competition on the 15th December so make a not in your calendar to visit on that date (need some sort of iCal widget here don’t I?)

Congrats Tref, all the best with your new data home.

Thanks Mark. Interestingly I only noticed the blue lights on the photo – I’m not sure they were visible just stood there looking at the kit. Eerie huh? 🙂

Congratulations Tref and Timico – Building a Data Centre is no mean feat. Hope all goes well for you. I thought that picture with the blue lights on was the new entrance to your secure iPad/HTC testing room Tref when I first saw it 😉

Ian look soooooooooo cute in that picture – bless him.